Rufous-fronted Babbler Stachyris rufifrons is a rare lowland and submontane resident of Borneo from sea-level to 1,530 meters. It is a slope specialist occurring in lowland and hill dipterocarp and lower montane forest, kerangas, bamboo, Albiza plantations, Dillenia saplings and scrub on basic soils.
Clive Mann, in his Birds of Borneo, mentioned that the Borneo race recorded as S. r. poliogaster, the race from Sumatra and Peninsular Malaysia,  was presumably in error. Bornean race should be S. r. sarawacensis, and there is a specimen of sarawacensis in the Natural History Muzium, Tring, UK,  from G. Sidong taken at 370 meter.

Smythies recorded both races and the Sabah birds are allocated to S. r. sarawacensis, which is the endemic race..
This genus is  in the process of being dismantled, Craig Robson and Susan Myers have taken this species out from Stachyris and put under the genus Stachyrisopsis.

Like other babblers, their habits of foraging in dense foliage in lower to mid-storey and their typical skulking behaviours make photographing them a real frustrating affair. At 11 cm, their small size makes them even tougher to spot in the less than ideal light under the forest cover and thick undergrowth. They are usually heard but seldom spotted in clear view.
After hearing them but failed to locate them in numerous previous occasions, I was lucky to be rewarded with these  record shots of this small bird. The images were taken in Tawau. 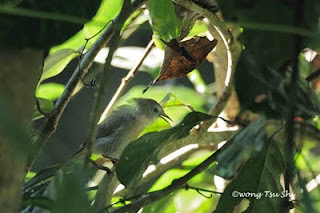 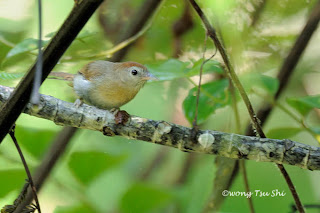 This is my lifer, making my photographed wild birds of Borneo count to #317.
Happy birding.