Green Broadbill Calyptomena viridis, commonest of all green broadbills, occur in lowland primary forest throughout Borneo, from sea level to 1,300 meters. The other two green broadbills occuring in Borneo are the rare Whitehead's Broadbill Calyptomena whiteheadi and the super rare Hose's Broadbill Calyptomena hosei.
This is a fat, curious looking bird with short-tailed, large-head, grass green with black markings, and with the feathers of the forehead partly covering the bill. The female lacks the black in the neck and wings.
Being all green,  this is not an easy bird to see in the foliage of the canopy but may at times seen passing from thicket to thicket and concealing itself among the green leaves.
Its typical call is commonly heard in the lowland forests and can be readily recognised once known: a short bubbled note, emphasized at the start and with an upward inflection, having the timbre of a stone bouncing on a frozen lake.
This is my lifer from Tawau and my number 314 photographed wild birds of Borneo. 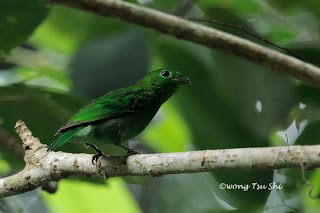 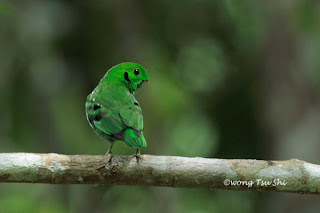 
Photodocument of Wild Birds of Borneo