Horseshoe bats are small to medium sized bats with an elaborate noseleaf. The anterior section is rounded and horseshoe-shaped. In the middle behind the nostrils is a raised portion called the sella. Behind this is the posterior noseleaf which raises to a long lancet-shaped point. The shape of the sella and the connecting process which joins it to the posterior leaf varies between species and is a useful diagnostic character. The ears are large with a prominent fold on the outside edge, the antitragus. The eyes are small and often partially hidden by the noseleaf. The tail is moderately long and almost completely enclosed within the interfemoral membrane.
In other words, they have a distinctive looking face, which is unmistakable.
This Bornean Horseshoe Bat Rhinolophus borneensis was discovered in a drain while we were out photographing birds. It would not hung still and was moving incessantly making photographing it in the dark drain even more challenging. Here it is, a fat and cute looking Bornean Horseshoe Bat. 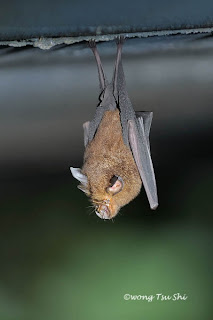 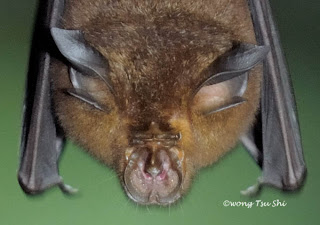