While we were at the Nikon Kinabalu Photography Workshop in early May 2010, all of us were trying to locate the endemic and elusive Whitehead's Trogon Harpactes whiteheadi to photograph. It was reportedly seen along Liwagu Trail by another photographer earlier, there was also report of a nesting pair nearby. We did made an effort to trace this bird, but luck was not with us as we tracked the road running along the Liwagu Trial and was not rewarded with any sighting.

On the final day while on the same old beaten path we encountered this small beauty which was foraging on the lower trunk of a medium sized tree, we quickly took photograph of it. It is the other "Whitehead", not one of those well known Whitehead's Trinity birds, but one of the two lesser known "Whiteheads" that dwell in the mossy montane forest of Borneo.

It is the Whitehead's Pygmy Squirrel Exilisciurus whiteheadi,  at least a consolation for some of us who missed  the Whitehead's Trogon but got this instead, as it is still a "Whitehead's". Like the other "Whitehead's" this is also endemic to Borneo and known only from its mountains. 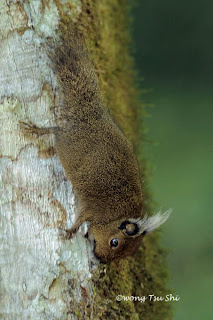 wow! excellent shot and very beautiful mammal! the form of this' squirrel species is quite unique!