It was a long weekend for Sabah at the end of May as we celebrated the Harvest Festival.  We drove to  Sandakan for my wife to visit her sisters and for me to visit Rainforest Discovery Centre (RDC), hoping to photograph the Banded Kingfisher Lacedo pulchella and to try my luck on the Ruddy Kingfisher Halcyon coromanda which was photographed there a couple of days earlier, however, like every thing else in life,  you wiold be assured of disappointment if you eagerly await it, none of these was sighted and the score card was zero. The following were the birds and other creatures photographed during the long weekend at RDC.
One thing that I did not do during the period was I did not once go up to any of the landmark observation towers nor did I walk on its canopy walkway, for the simple reason that they were too crowded with members of the public who also took advantages of the long weekend and came to enjoy the nature.
Dollarbird Eurystomus orientalis, a common and unmistakable bird, I saw a young bird being fed by adults. In Sabah, we have both a resident population and migrating visitors during the northern winter months, this should be resident bird as it is now well over the migrating season. 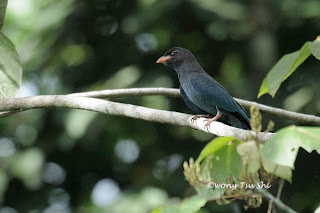 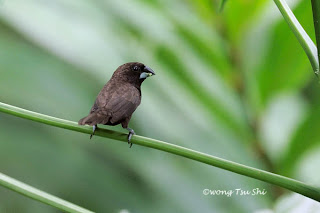 Dusky Munia
White-chested Babbler Trichastoma rostratum, a common resident of Borneo, frequently foraging near banks of forest streams, can easily be spotted along the flowing stream in RDC. Here it is preening after a shower in the cool water. Taken with ISO2000 on D300, without flash so as not to spook the bird. 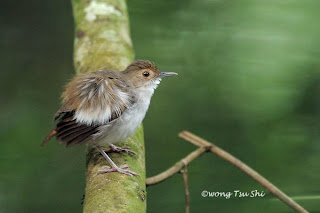 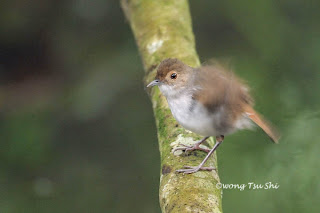 White-chested Babbler
A juvenile of Rufous Piculet Sasia abnormis, common resident, it was brought along by an adult bird. Since I have not got any images of the juvenile, I concentrated on taking his picture instead of the adult, it stayed for a few seconds before moving on. This could be a male bird as it has got yellow patch on its forehead. 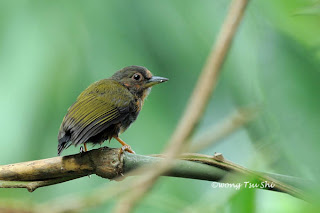 Rufous Piculet
Cream-vented Bulbul Pycnonotus simplex, another common bird of the disturbed forest. This individual has pale eyes. In Borneo, this bird sports both red and white eyes. 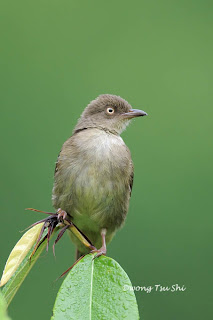 Cream-vented Bulbul
Black-headed Pitta Pitta ussheri, a bird that occurs in Sabah, to the border with Kalimantan Timur and Sarawak, north of the line between Lawas and Meropok rivers. Split from Garnet Pitta Pitta granatina following Lambert (1996), Erritzoe and Erritzoe (1998), Erritzoe (2003) and Mann (2008) owing to morphological and vocal differences and their apparent parapatry.
Pittas are real difficult to get good photograph of, they are shy, secretive, refuse to come out in the clear and always occur in dark forest understorey. Eventhough this bird was perched against the morning light and  was partially blocked, I was thankful that it came quite near for me to take its photo. 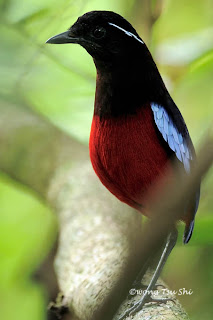 Black-headed Pitta
A male Purple-naped Sunbird Hypogramma hypogrammicum, a common bird throughout the lowlands and hills. This sunbird is quite similar to the Spiderhunter in habits. 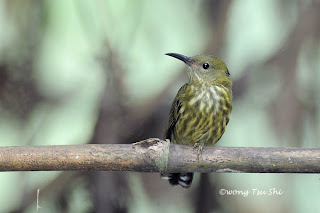 Purple-naped Sunbird - male
The setting moon whose retirement is hastened by the rising sun on the opposite horison. 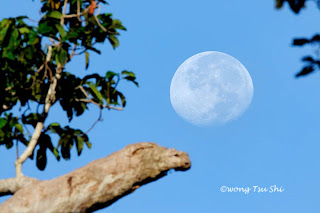 This Short-tailed Babbler Trichastoma malaccense came nearer than my lens's closest focusing distance that I could not lock focus on its eye. You can see that the focal plane is on the wing and legs. 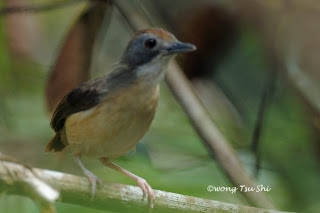 Short-tailed Babbler
However, it eventually came out in the clear for a record shot. This is my lifer, my #318 photographed wild bird of Borneo. It was also later observed to forage at the banks of the stream, behaving exactly like the White-chested Babbler. 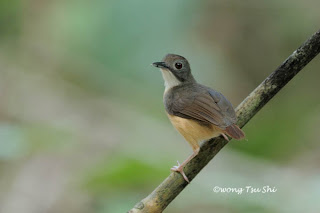 Short-tailed Babbler
Ornate Shrub Lizard Aphaniotis ornata, a lizard endemic to Borneo, stationery on a piece of leave, I almost touched it while maneuvering myself to take photographs. 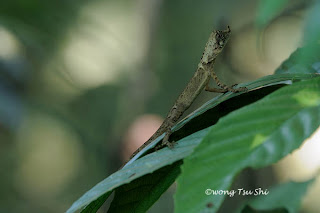 Ornate Shrub Lizard
This is the female of the  Bornean Angle-headed Lizard Gonocephalus bornensis, another endemic lizard of Borneo, however, field guide says its color is green. I suspected that it turned brown here for easier camouflage against the tree trunk. 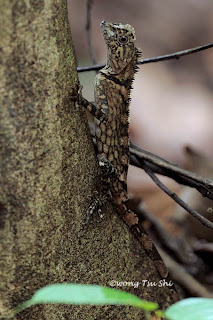 Bornean Angle-headed Lizard - female
White-bellied Rat Snake Ptyas fusca, common snake of the lowland, a large snake that grows to 3 meters in length, was spotted while it stayed still after noticing our approach. It was too long for me to frame it in my picture, so I have to shoot its head and sections of its body for later identification. 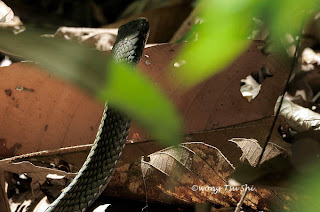 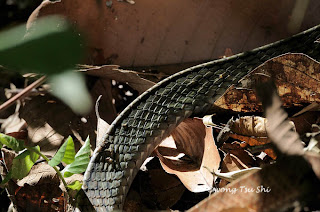 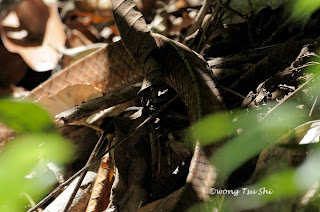 White-bellied Rat Snake
Fianly,  this male Asian Black Hornbill Anthracoceros malayanus flew in to perch on a nearby tree, basking in the late afternoon sun. 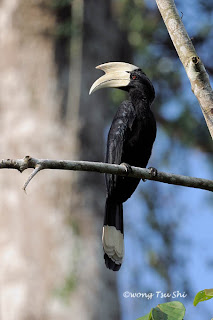 Wow Great series of photos from Borneo!
I really like the your pitta shot, the bird's just stunning. The light and composition on the Black Hornbill shot are also perfect!

Thanks a lot, Unravel.