A snap shot of caged birds in Balikpapan, Indonesian Borneo

I was in Sungai Wain, Balikpapan, Kalimantan Timur, Indonesian Borneo in the last week of March 2014 hoping to photograph the Borneo Peacock Pheasant Polyplectron schleiermacheri, which eventually proved to be too elusive. However, the trip was a thought-provoking eye-opener in another aspect of Bornean birds.

On the way to the airport on our way back, we stopped at two places where cage birds were openly on sale, one was housed in a building while the other was made up of a few stalls with birds in cages piled on top of each other on mobile carts.

Here are some images I managed to take of these two places. It is sad to note that I saw a few "lifers" there, being birds that I have yet to photograph in the wild but seen here inside cages. 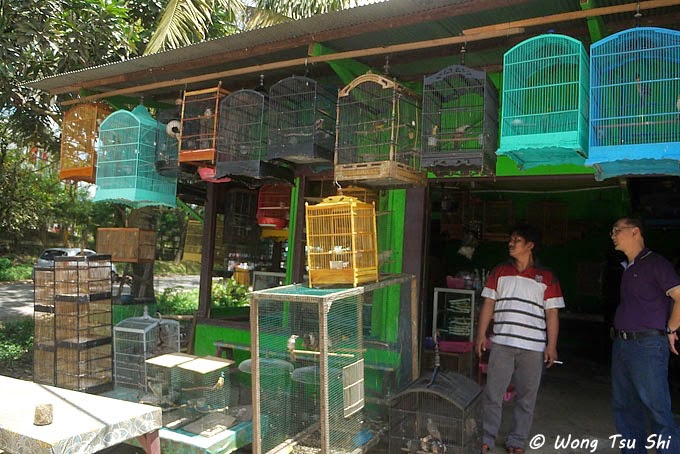 This is the shop, there is a Long-tailed Shrike Lanius schach in one of the hanging cages in the fore ground. 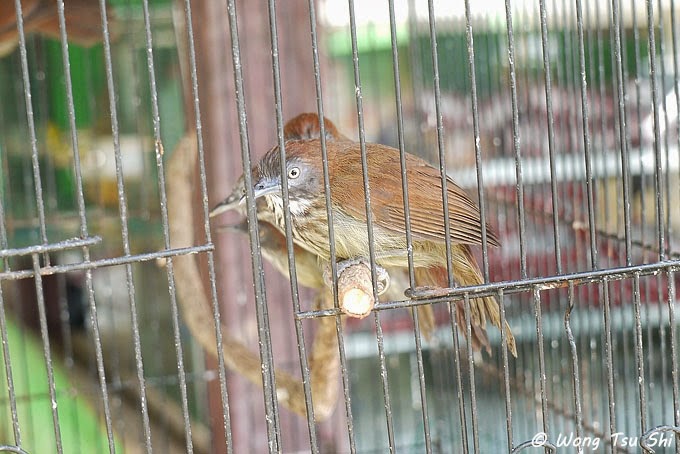 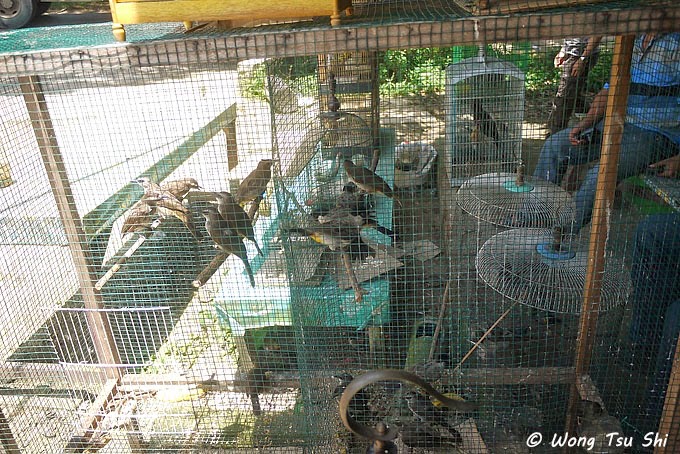 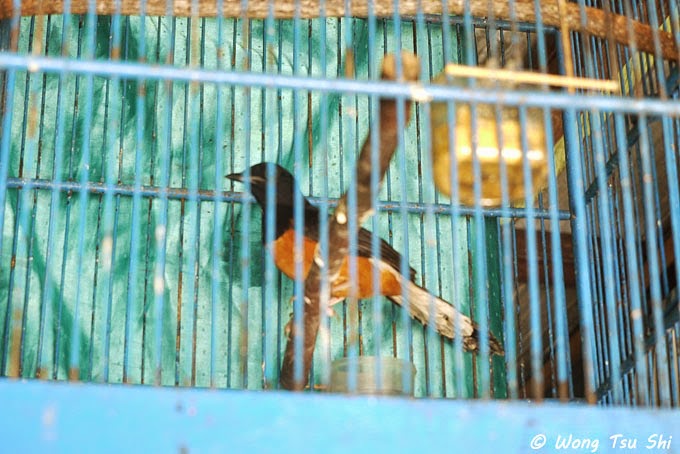 There are many caged White-rumped Shama Copsychus malabaricus , that's why it is so hard to see one in the wild there. 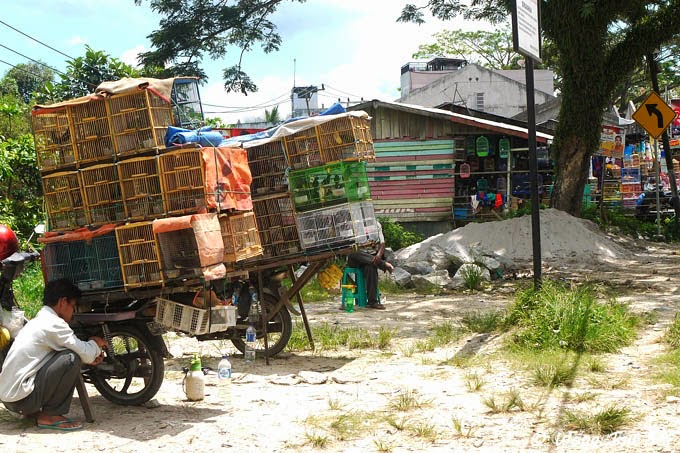 Mobile stalls, the building in the background is also in this trade as the cages are visible in this picture. 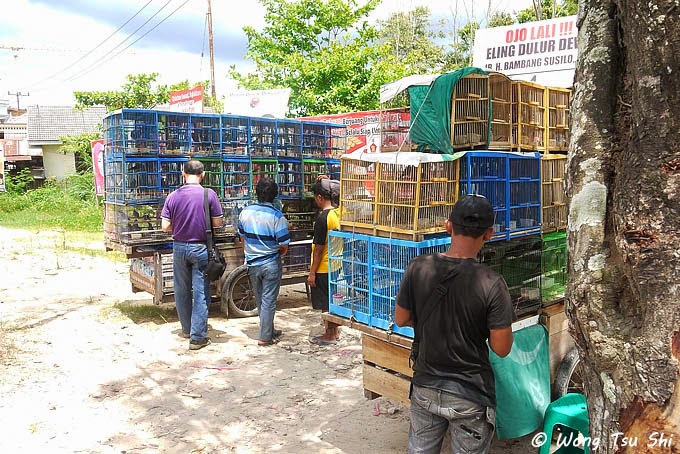 Mobile stalls from another angle. 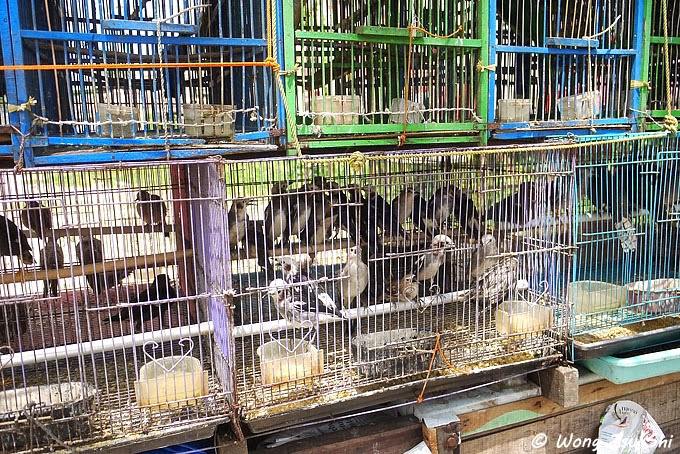 Chestnut-cheeked Starlings Sturnus philippensis that will not be returning to their home, sandwiched by cages of various doves and pigeons. 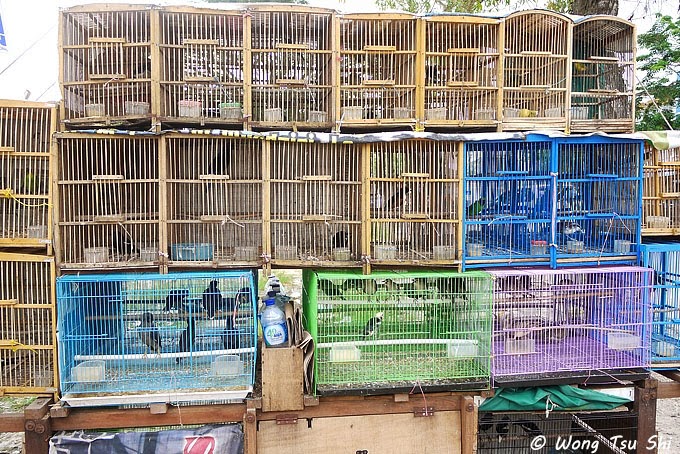 Cages and cages on top of each other. 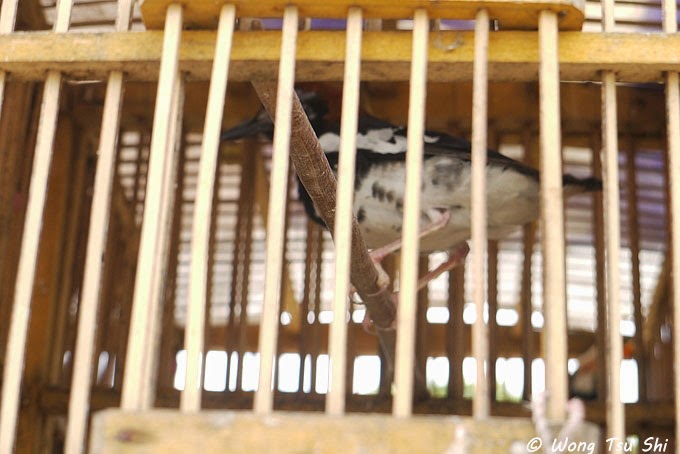 Chestnut-capped Thrush Zoothera interpres, I have yet to photograph one in the wild. 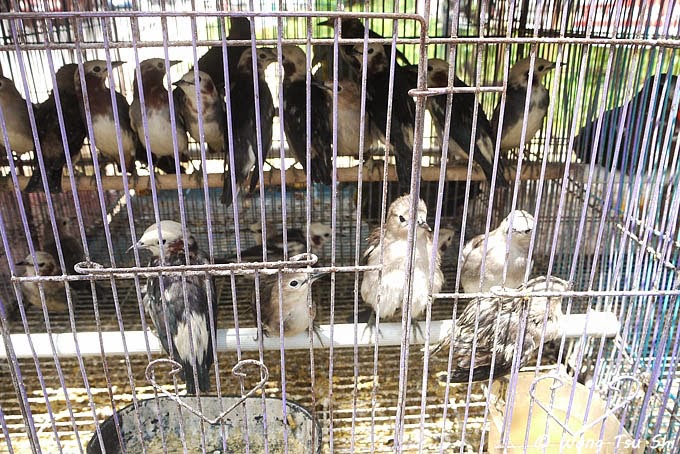 There are a lot of Chestnut-cheeked Starlings. 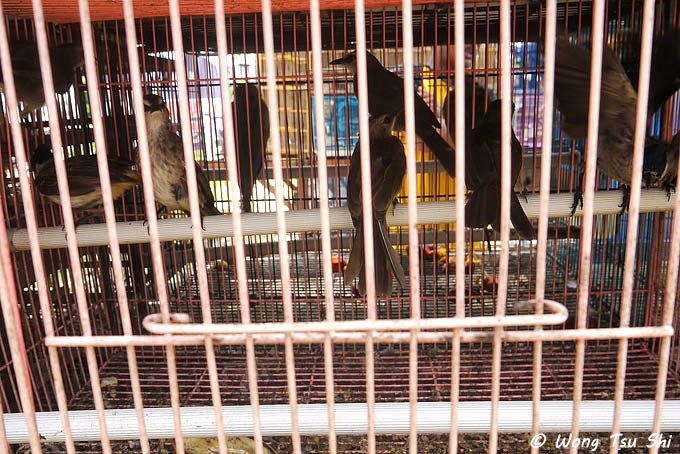 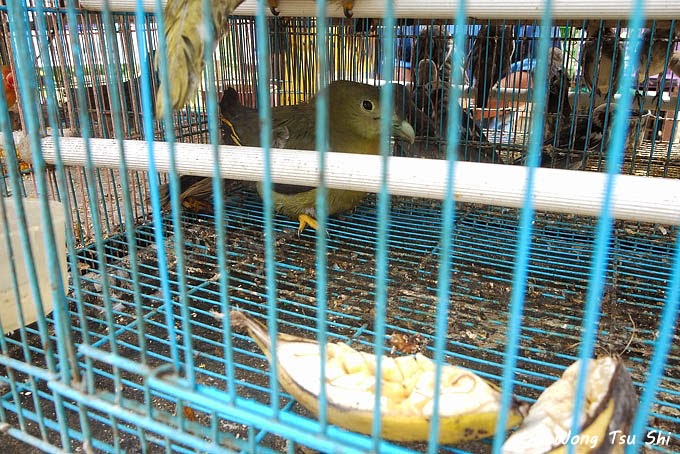 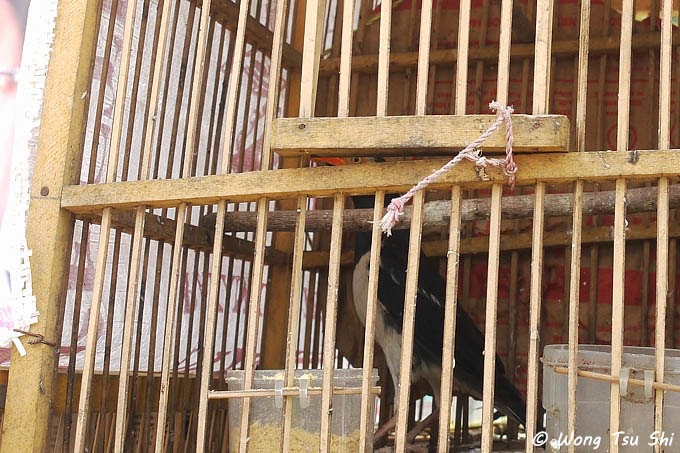 This is a Pied Starling Gracupica contra, a bird not in the Bornean Checklist. 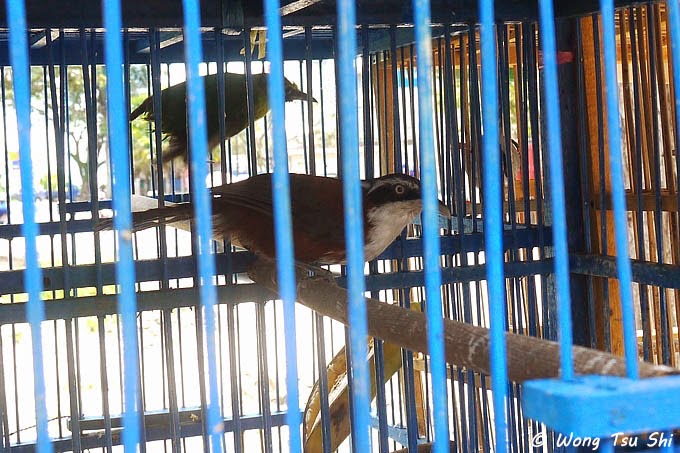 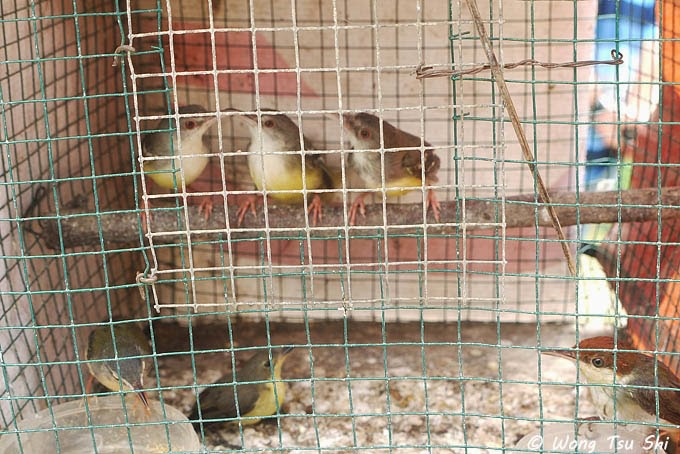 This is definitely a non-Bornean species, I suspect it is from Java but have no resources to check what it is. 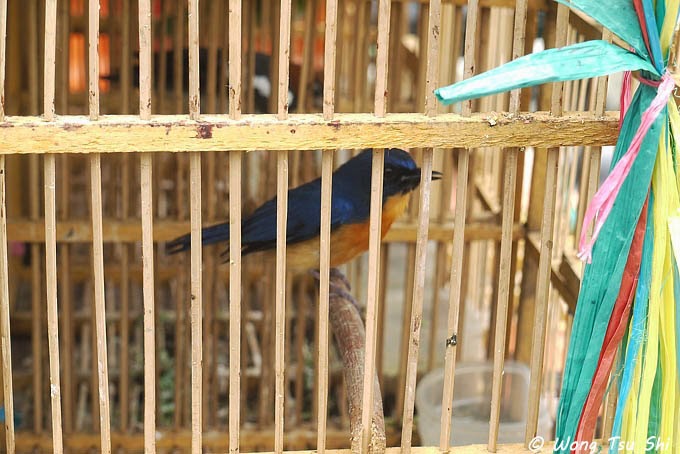 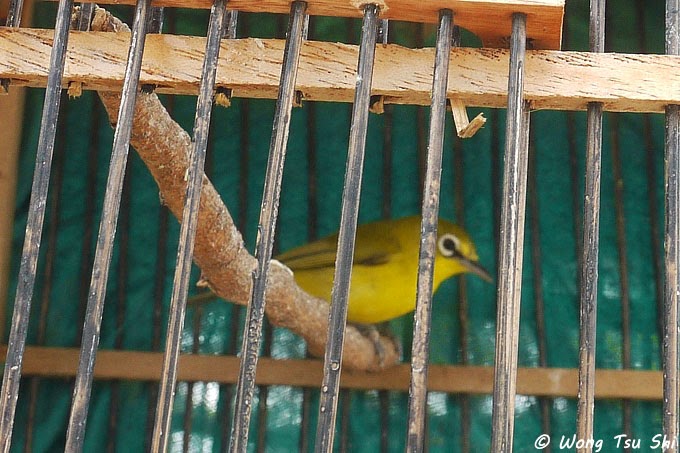 ﻿This is Yellowed Bellied White-eye or Lemon-bellied White-eye Zosterops chloris, mentioned in both Phillipps and Myers as only found in Karitmata, Matasirih and Marabatuan, which are islands off the coast of south and west of Borneo. Here they are, quite a few of them in cages for sale.

I even saw a fire-tufted Barbet Psilopogon pyrolophus, which is not in the Bornean checklist,  for sale.﻿

On casual conversation with the traders, we were told that some of the birds were imported from Java,  which explained the origin of those non-Bornean birds on sale.

Considering the deep-rooted tradition of trapping and caging birds in this part of the world, I believe this is a negligible and immaterial part of the huge cage bird trade in Kalimantan. I can't help but keep thinking about the number of birds species not in our traditional checklist imported to the island of Borneo which managed to escaped and gone feral in the whole of Kalimantan over these years, bear in mind that Kalimantan occupies the largest part of the island covering 72.57% of the land area.

A major revision to the Bornean Checklist might be required if we have adequate data from that part of Borneo.

That's a sad sight Wong. I thought Brunei was bad... Unfortunate that you missed the pheasant, hope you got some other birds to make up!

Thanks Folkert, I have a few lifers in Sungai Wain, so not completely fruitless.