It is a rare resident of Borneo and only confined to the coastal areas from Sandakan (Sukau, Kinabatangan, Gomantong), Lahad Datu, Davel Bay to Tawau  (Merotai,  Kalabakan) and Maratuas in Kalimantan.

In late March 2010, many thanks to invite by Mr Ku Kok On who was informed by a friend of his that there was a pair of yellow bird nesting in his vegetable farm in Merotai, which eventually turned out to be this rare Black-hooded Oriole.

When I was there on the 28th March the parent birds were busy carrying food to feed the two fledglings which we expected to flew off real soon.
We went back to the location again in May to try our luck and we were glad to learn from the farm hands that the birds eventually flew off with the parents and disappeared into the nearby mangrove forest. 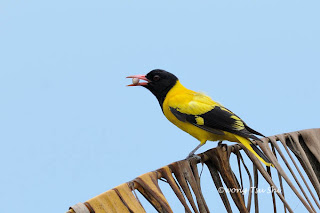 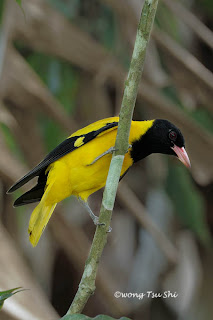 This is my lifer from Tawau and my number 315 photographed wild birds of Borneo.
Happy birding.
Photodocument of Wild Birds of Borneo

Beautiful shot of this rare bird.

Congratulation on rare finding.
I have only see this common
Oriole