Long-tailed Shrike Lanius schach is a rare bird of Sabah, and for that matter, the two common migrating shrikes in Peninsular Malaysia, Tiger Shrike and Brown Shrike,  are rare occurances in Sabah.
One particular race of Long-tailed Shrike  L. s. bentet is locally common in parts of Southern Kalimantan. Two other races L. s. nasutus and L. s. schach have also been recorded as uncommon winter migrants to North East Borneo.
L. s. bentet is a bird that has black fore-crown and sides of head, and grey nape and hind-neck, this race is also found in most part of Malay Penincular, Java, Sumatra and the Lesser Sundas.
The following images photographed in Tawau since 2008 are the first positive photographic records of this race in Sabah, earlier records of this race in Labuan in 1957 and Membakut in 1962 were of inconclusive sight records. 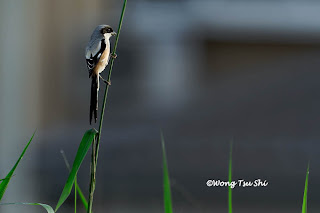 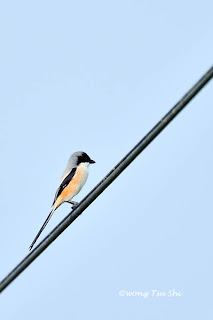 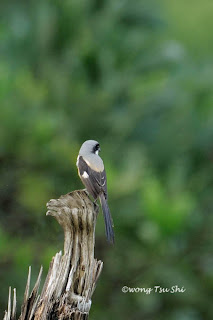 L. s. Bentet May 15th 2010
The race of L. s. nasutus has forehead and hindneck black, upper mantle and black grey, just like wearing a black helmet covering to the back of the neck. It looks similar to the bird in the following images but have the black of the back of the head further down.

There is another race in Kalimantan, Borneo which differ from the typical L. s. bentet in having more extensive black on the forehead, and as individuals having unusually large amount of blacks are known from many populations of Long-tailed Shrike throughout their range, the Kalimantan birds agree with birds from East Java, where the proportion of unusually black birds is high, and they are subsumed under the name L. s. bentet. (If seperated, this could be united with birds from East Java as L. s. tosariensis). The variable amount fo black in forehead in the Bornean birds could be a result of polychromatism. Thus some descriptions of L. s. bentet in fieldguides say it has variable amount of black in the forehead.

I think  the following bird photographed in Tawau  is from that particular race instead of L. s. nasutus which should have more black further down the hind neck. 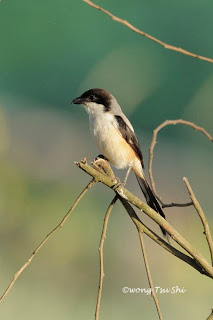 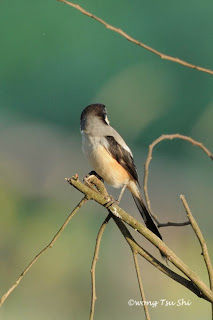 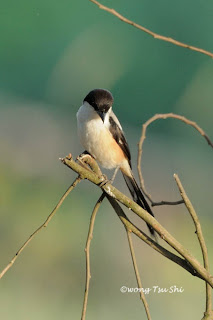 HI Kiah, I thought it is common in Peninsular?

Check Ck Leong posting at his blog about this bird too from Mesilau :)

Yes, I saw CK's bird, and I am of the view that his bird is not from Philippines but from Kalimantan.