Unarguably, to the human ears, the best song bird in Borneo is the Straw-headed Bulbul Pycnonotus zeylanicus, the remaining three best song birds, however, are all from  the Robins. Their beautiful songs are undoubtably their curse as well,  for they are being extensively trapped, caged and traded in their range as pet birds for their ability to sing.
The other bird which has a bright and melodious song  that I have encountered in the field is the Rufous-crowned Babbler Malacopteron magnum, it sounded in the same league as the Shamas.
Rufous-tailed Shama Trichixos pyrropygus is a scarce resident of the lowlands, from sea level to 900 meter. Its song, a series of loud mournful whistles is not as varied and melodious as compared to its two  cousins, the White-rumped Shama Copsychus malabaricus and the North Bornean endemic White-crowned Shama Copsychus stricklandii. This could be a blessing for the Rofous-tailed as it is not as commonly seen as caged bird as compared to the other two Shamas in Borneo. In Sabah, I have regularly seen White-crowned Shama and Oriental Magpie Robin Copsychus saularis being kept as pet birds but have not come across a Rufous-tailed Shama being caged, whether they are not as common in the wild or they are not as popular, I am not sure.
Here is my lifer, a male Rufous-tailed Shama, taken in Tawau, making my photographed wild birds of Borneo count to #316. 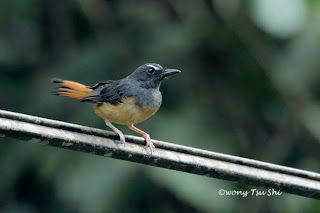