The next morning, 31st August, Malaysia National day, on our way back to Tawau, we made a detour to Poring, having heard and seen many reports of desirable birds from there. However, Poring Hotspring was not productive on that day as there was no fruiting tree at this time of the year. We walked the trail to Kipungit Waterfall,  and no Pitta call was heard, we did not attempt to climb to the Bat Cave and Langganan Waterfall as I was carrying my 600 mm rig with me at that time.

Nevertheless, this Barbet was seen feeding on a high brunch, it looks like a juvenile Blue-eared Barbet Megalaima auatralis (Now Psilopogon australis). This could also remotely be a juvenile Golden-naped Barbet Megalaima pulcherrima (Now Psilopogon pulcherrimus) as they have been recorded to descend down to this altitude level. The Yellow-crowned Barbet would have shown some red on the nape. 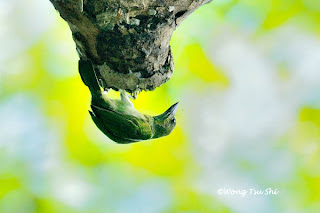 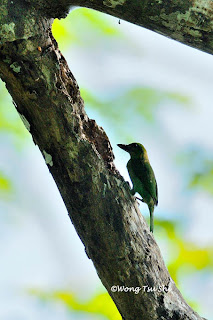 
This is the Greater Green Leafbird Chloropsis sonnerati, also foraging on a high branch against the brightly lit sky, resulting in a horrible looking record shot. 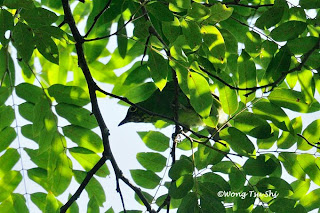 This Draco sp. flying Lizard flew in to feed on ants on this tree trunk, after it left, a Rufous Piculet Sasia abnormis also flew in for a few seconds, there was no no time to take a pciture. 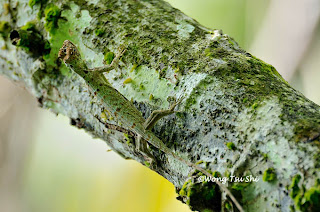 This Grey-cheeked Bulbul Criniger bres (Now Alophoixus tephrogenys) was feeding next to the entrance of the Canopy Walk. Opposite it was the endemic White-crowned Shama Copsychus stricklandii. 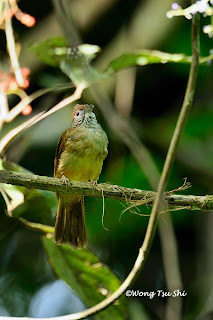 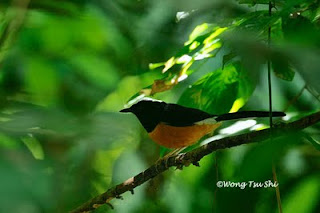 
There are a number of stalls across the road selling handicrafts and stones laced with mineral  and crystals deposits to tourists. 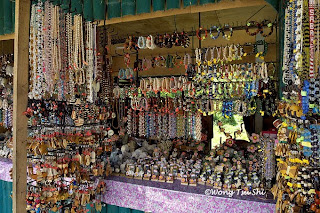 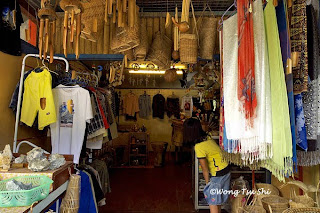 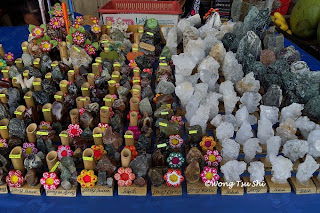 On the way we stopped at Nunuk Ragang. Nunuk Ragang is a legendary red banyan tree traditionally located at the intersection of the left (Liwagu Kegibangan) and right (Liwagu Kawananan) branches of the Liwagu River to the east of Ranau and Tambunan in Sabah. The word "Nunuk" is a Dusun word for the Banyan tree, and "Ragang" comes from "aragang", the Dusun word for red. It was under this giant banyan tree that the village of Nunuk Ragang was founded and flourished. Tradition places this village as the original settlement grounds of the Dusun people who inhabit most of central Borneo. In 2004, the quasi-government group Kadazandusun Cultural Association (KDCA) set up a memorial near Tampias at the site of what they believe is the original village. The memorial, which was built in the form of a huge fig tree, contrasts with the surrounding modern palm oil plantations. The association conducts annual pilgrimages to the site, timed to coincide with the inauguration of its paramount chief, the Huguon Siou (Wikipedia). 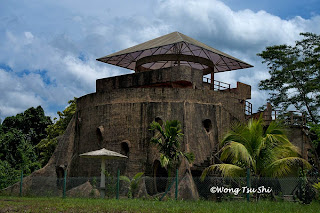 
We found this snake on the road there. Our friend, Mr. Ku Kok On was so excited and went to capture it to play play. 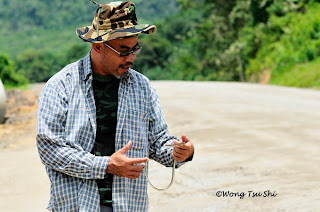 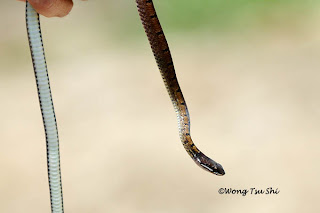 Close up of the snake 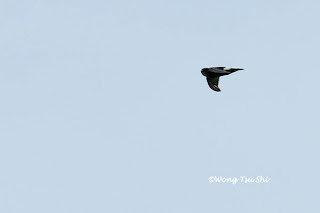 House Swift
As there was no activity, we left after stopping for a while to take some picture.