Common Goldenback Dinopium javanense, 30 cm, one of the larger woodpeckers of Borneo.
It is a locally common bird, in Borneo, it is generally found in coastal areas, secondary forest, cultivated gardens and coconut plantation. Occasionally found inland, e.g. at Danum. It is often recorded in cultivated lands, parks and golf courses within its range.
The diet consists of ants, insect larvae, small scorpions, cockroaches and other insects.


The male is a strikingly handsome bird, with golden yellow wings and fiery red crest and rump, banded black and white cheeks, and white underparts with black crescentic scale-like markings. The female has the red crest replaced by a black cap spotted with white.  It can only be confused with the similar looking Greater Goldenback Chrysocolaptes lucidus which can be differentiated from different facial and hind neck markings.
The Sabah race is D. j. raveni, an endemic race, with more buff below, throat more broadly spotted and female with the crown streak very narrow.


This pair was my lifer (My #321 photographed wild bird of Borneo) photographed in Merotai, Tawau, on a dead tree next to coastal mangrove forest, I have also seen one on a coconut palm in Tinagat,  which is also next to the coast, confirming its status of a coastal dweller. 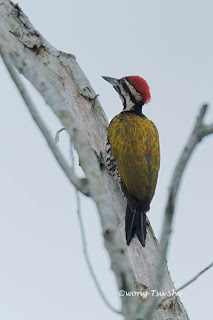 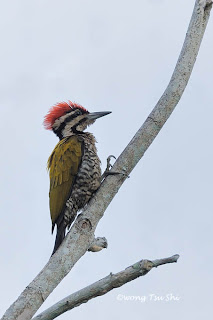 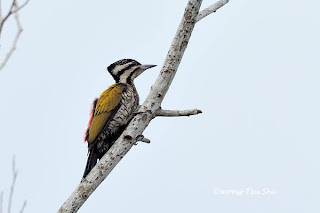 Nice one sifu and last time I saw these was few years ago at Tuaran beach area :)

Yes, Jason Sifu, most records are from the coast.

Just saw one in the morning today at the SMC Hospital near Damai.

It had this distinctive call. Grabbed my binocs and whoa!