Plantive Cuckoo, Cacomantis merulinus, once called the Malayan Brain-fever Bird. Brain-fever Bird is the name for the Common Hawk Cuckoo Cuculus varius, a bird that does not occur in Borneo, so named because the English men thought its song sounded like "Brain-Fever, Brain-Fever", and the name had since been applied to several cuckoos.

One of its songs is the three notes "tay-ta-wi," repeated three times and rising in pitch, however, please bear in mind that the  similar looking Rusty-breasted Cuckoo Cacomantis sepulcralis also sings a similar song. As it is not restricted to forest, it is found in cultivated areas, plantations and gardens as well, you may also see it perching on the fence or wire, it is the most commonly heard cuckoo in Bornean lowlands. I can even hear one calling in the nearby jungle from my house.
This is one of the parasitic cuckoos and its hosts are Common iora, Streaky-breasted Spiderhunter, Yellow-bellied Prinia and Tailorbirds.
The male bird is quite easy to identify in that its head and upper breast is grey in contrast with the bigger Rusty-breasted Cuckoo whose throat and breast is not grey. The female is similar to the male, other than  the hepatic morph female which is a totally different looking bird, with upper parts barred rufous and brown and underparts whitish barred dark brown, looking very similar to Banded-bay Cuckoo Cacomantis sonneratii. The other cuckoos in Borneo which has hepatic morph female are much larger birds and thus not easy to be mistaken as Plaintive Cuckoo.
The hepatic female of the Plaintive Cuckoo can be distinguished from the similar sized and similar looking Banded-bay Cuckoo Cacomantis sonneratii in that the latter has prominent darkish eye-stripe and whitish supercilium.

This Hepatic morph female was photographed in Tawau, it was foraging in the short bushes until another  non-morph bird came to chase it away. 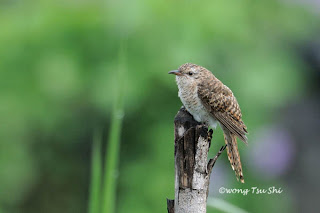 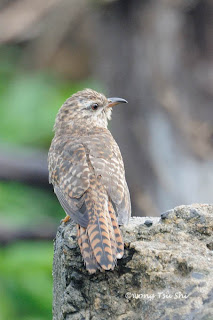 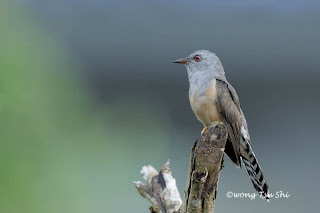