Went to Tinagat  today (22 August) to check on the waders.
When I reached there, the tide was low and the waders were out a few hundred meters away and there was not many of them. I saw some Great Knots Calidris tenuirostris, many of them still in their breeding plumage, some presumably Red-necked Stints Calidris ruficollis, a few Terek Sandpipers Xenus cinerea,  a Grey Plover Pluvialis squatarola, a few Charadrius Plovers, two Little Terns Sterna albifrons, a few Tringa waders, a few Great Egrets Ardea alba. Nothing spectacular and none of the big curlews and Godwits were in sight. 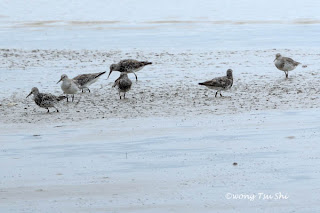 Great Knots in various stages of moult from breeding plumage
However, on closer scanning, I saw a single bird that looked different from the group of feeding Great Knots. It has chestnut breast and is smaller than the Great Knot, it is the middle bird in the following picture. 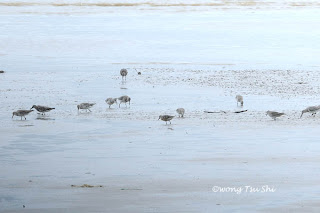 To my delight, it is a Red Knot Calidris canutus. My lifer and my #323 photographed wild birds of Borneo. 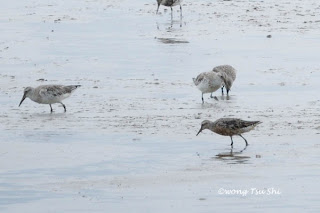 I am lucky as it is still in partial breeding plumage, otherwise I  would have just treated it as another Great Knot, as in non-breeding plumage and size and bill differences with the Great Knot would not be that easy to differentiate from this far. It is a little smaller than the Great Knot and has shorter bill, as evident from the picture, and of course, in breeding plumage, it chestnut-red face and underparts is distinctive, we can still see the chestnut color breast here from hundreds of meters away. In contrast, a Great Knot in breeding plumage shows blackish breast and flanks made up of bold black spots, as in the first picture.
Red Knot  is a very uncommon or rare passage migrant to Borneo. Singletons and small flocks reach Borneo from Northern Asia.They have been recorded sparingly from Sabah.
The few Great Egrets are in breeding colour as in this picture, they could be actually breeding here somewhere, as they have been proven to breed in Sabah here. 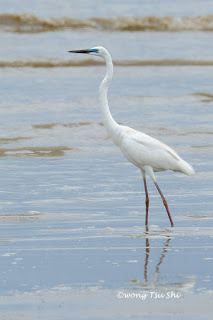