Great Slaty Woodpecker Mulleripicus pulverulentus, at 51 cm is the world's largest woodpecker. Range from Himalayas to Southwest China, Southeast Asia, Greater Sundas and Palawan, occurs on lowlands and hill dipterocarp forests, sometimes wanders into logged forest and plantations.
It is a scarce and rather uncommon resident of Borneo. It usually seen on high rising tree trunks of the towering tropical forest trees in Sabah, with laud drumming that resonates far and wide which can be heard far away on the forest floor. I once heard one drumming on a tall tree while I was just standing beneath, however I could not see it until it flew away as it was too high above on a horizontal trunk that blocked it from my view below.
The two problems of getting a good photograph of this bird are, a), it usually stays high above, making the bright sky as unavoidable and unpleasant background, and b) it is too far and too high away from the camera, however, these two problems are partially eliminated if you have a chance to photograph them from the canopy walkway of the RDC at Sepilok, as they can come quite near and you can shoot from a much better angle from the raised platform of the canopy walkway.
The Bornean race is M. p. pulverulentus, and the Bird Forum Opus site on this species is displaying a picture taken by me earlier.
I photographed this pair (male bird on top in both images) in Merotai, Tawau, the same place where I photographed the Common Goldenback, they came down very low on a dead tree, doing some ritual, may be some sort of mating rituals, I am not sure, spreading their wings to make displays while calling out loudly.

This was the first time I encountered them so near and some of my photos had cropped wings, even though I had the full-frame shots but I could not have a nice background as the paticular tree was a lone standing tree and I had to shoot against the sky. Here they are, the largest woodpecker in the world. 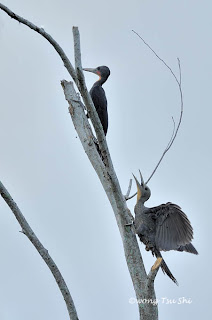 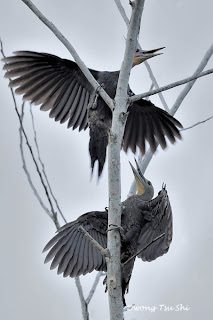