Oriental Reed-warbler Acrocephalus orientalis is a common passage migrant and non-breeding visitor to Borneo. It is a plain olive-brown warbler, slightly smaller than the Yellow-vented Bulbul Pycnonotus goiavier.

It is a skulking bird, clambers around and feeds on insects in thick vegetations.
There is a very similar looking but much shyer and rarer Clamorous Reed-warbler Acrocephalus stentoreus occuring in southern Borneo. According to the current available field guides, this species has whiter throat, no fine streaking on throat or upper breast, has yellow gape instead of pink and has no pale tip on tail.
However, my review of images of both species at Oriental Bird Images (OBI) database shows that they are very  similar looking and hard to distinguish in the field. Per the OBI images, Oriental Reed-warbler can also have no streaking on throat and upper breast. Clamorous Reed-warbler can also show pale tips as well as non-yellow gape.

Separating Oriental from Clamorous was not as easy as the field guides led us to believe, the most accurate way to separate them is by comparing their wing formula. For Clamorous Reed-warbler, the second primary,  counted from the outside, (P9) is shorter than the fifth primary (P6). However, the P9 is equal or longer than P6 in Oriental Reed-warbler. However, most of us do not have the luxury of holding the bird in hand to do the comparison. But in Sabah we can safely identify the bird as Oriental Reed-warbler unless positively proven otherwise, as Clamorous was never recorded in Sabah.  It was only positively recorded in Kalimantan so far. The northernmost records in Borneo were in Brunei from birds seen and heard  in June 1984, presumably too late for the migratory Oriental Reed-warbler (Clive F Mann).

These images were captured in Tawau in December, next to Mr. Ku Kok On's house not far from the coast. It is my number 305 photographed wild birds of Borneo. 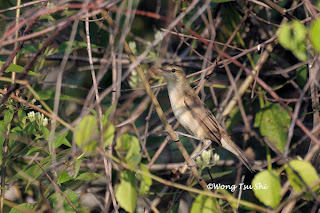 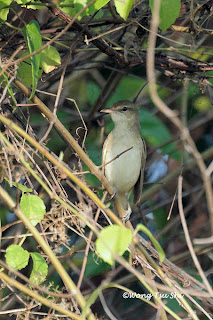 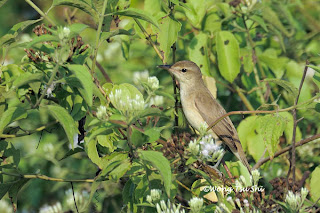 Happy birding.
Photodocument of Wild Birds of Borneo #305
Standard References for my blog