Gould's Bronze Cuckoo Chrysococcyx russatus, a very similar looking bird to Little Bronze Cuckoo Chrysococcyx minutillus. However, Gould's Bronze Cuckoo has a variable amount of buff on the side of the breast and buff edging to the underside of the outer tail feathers, whereas the underside of outer tail feathers of Little Bronze Cuckoo is entirely banded black and white over both webs, and without rufous.
These bronze cuckoos are apparently very common in south and east of Kalimantan as D.A Holmes in his Recent Notes On The Avifauna of Kalimantan (1986), he has more records of bronze cuckoos in the Chrysococcyx "malayanus" group from South and East Kalimantan than from anywhere else in the Sunda Region. [Parker, (1981) demonstrated that C. minutillus, not malayanus, is the correct name for Little Bronze Cuckoo.]
Their taxonomy is still unresolved as some authorities recognise C. russatus as a separate species and others treat C. russatus as a subspecies of  C. minutillus.


Payne (2005), recognised only one species, C. russatus was regarded as a subspecies of C. minutillus. Other authors also recognised these as a single species by putting much weight on their extensive hybridization in Northern Queensland. However, there remain several aspects that need to be resolved before a definitive answer is achieved. Evidence of sympatry (the use of the same or overlapping geographical areas, by populations of related species, without interbreeding) is based on few specimens, and it has not been documented that both forms actually breed in northern Queensland.  A Field guide to the Birds of Borneo by Susan Myers (2009) follows Payne.
Parker's (1981) discovery of specimens of C. minutillus cleis and C. russatus aheneus collected in Borneo from the same locality and in the same month was the main basis for his splitting minutillus and russatus.
Clive F. Mann  in line with Smythies (1999) follow Parker (1981) and keep them separate in his 2009 Annotated Checklist to the Birds of Borneo. Quentin Phillipps follows C.F Mann in maintaining them separate in his Phillipps' Field Guide to the Birds of Borneo (2009).
Here is a  Gould's Bronze Cuckoo's  photo taken in Tawau (my number 306 wild birds of Borneo),  the buff on the underside of the outer tail feathers is evident. 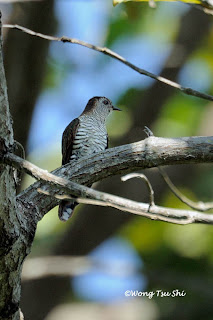 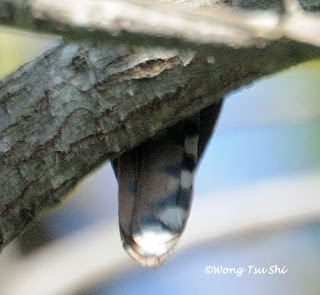 Here is a comparative photo of the Little Bronze Cuckoo showing all black and white underside of the outertail feathers. 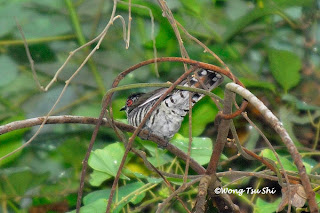 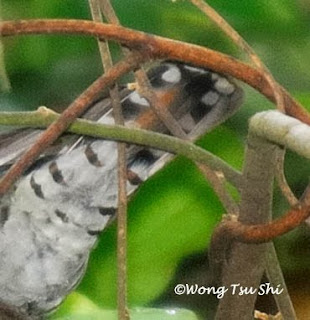 Happy birding.
Photodocument of Wild Birds of Borneo #306
Standard References for my blog