Ang Pow for the year of the Tiger comes in green! My last year Ang Pow bird was the endemic Borneo Bristlehead (Pityriasis gymnocephala), which is an unmistakable red bird.
Nordmann's Greenshank (Tringa guttifer), a rare vagrant to Borneo, with very few records. In The Birds of Borneo - An annotated Checklist by Clive F Mann, he  listed 10 records only from Borneo dating from as early as 1913 to the latest in 2006. The only records from Sabah are a few sightings from Papar in the 1960s.
Nordmann's Greenshank is a threatened species (ICUN status: Endengered) with a very small world population estimated at only 500-1,000 individuals and decreasing. This scarce species breeds in coastal eastern Russia and winters as far south as South-East Asia and Australia (BirdLife International 2009).
Although often perceived to be difficult to distinguish from the Common Greenshank (Tringa nebularia) in winter plumage, however, once acquainted, it is not hard to spot their distinctive features to isolate them out from Common Greenshank.
The distinctive features are its bicolored, thick looking bill; shorter yellower legs; hunched appearance produced by a heavy-breast;  pale-ash-grey upperparts feathers which are narrowly fringed white, and the tertials which are not notched balck-and-white.
Two individuals were spotted and photographed at Tinagat, Tawau on 7th February 2010. I was extremely lucky as the tide was just receding when we reached the sea side, the still quite high water level brought them nearer to the shore, if our timing was out and the water level was too low, they would be miles out in the mud, or alternatively  if the water level was too high, they would have no place to land and hence would not be recorded.
This is my  number 304 photographed wild birds of Borneo.
Here are the pictures of the birds, less than 1,000 worldwide, and latest record and first ever photograph from Sabah. 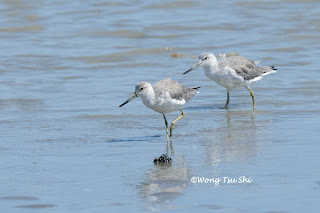 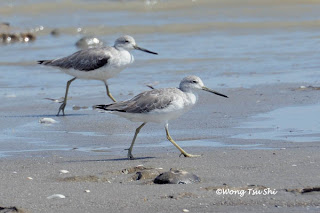 The hunched appearance of the birds is apparent. 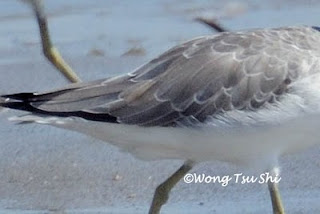 Enlargement of the above picture, showing the lack of
notched tertials of Nordmann's Greenshank. 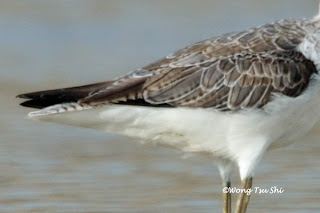 Photodocument of Wild Birds of Borneo #304

Hao Kin Ngiao, Taiko!!
Well done for another record!
Was there any record at all in the west coast of Sabah?