Of the nine species of Barbets in Borneo, eight are from the genus Megalaima, which are green with the head and neck gorgeously patterned with vivid reds, blues and yellows, the other is the nondescript Brown Barbet Calorhamphus fuliginosus tertius, which is a brown above and whitish below, with reddish throat.
The main feature of all Megalaima barbets in Borneo is the relentless perisitence of their calls, so much so that after a while, you no longer notice them. Their bills remain closed when calling giving a ventriloquial effect of varying volume.
Yellow-crowned Barbet Megalaima henricii, photo taken in Tawau, Sabah, the ninth and the last barbet of Borneo to be seen for me to complete all the barbets of Borneo.
This is the Yellow-crowned Barbet,  ranges from lowland to sub-montane (0 to 1,220m), with an unmistakable call that consists of a roll and four 'tuk' notes, repeated: 'trrrrk-tuk-tuk-tuk-tuk, trrrrk-tuk-tuk-tuk-tuk' and on and on ........ 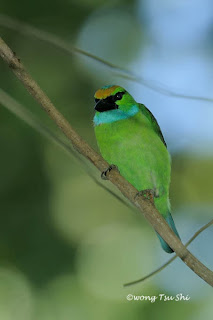 The target for 2010 is, therefore, to photograph the Mountain Barbet and complete the collection.

Photodocument of Wild Birds of Borneo #308


Standard References for my blog

Excellent sifu to complete the Barbet of Borneo hahaha.

Care to post all Barbet to our BoBC blog ?