Bar-tailed Godwit Limosa lapponica  is a scarce winter visitor and passage migrant, the race in Sabah is Limosa lapponica baueri.
A single bird was seen and photographed in Tinagat, Tawau on 7th February 2010.


Bar-tailed Godwit is a remarkable bird and has been tracked to make non-stop flight over long distance.
(The following info and map are taken from wikipedia.)

It was shown in 2007 to undertake the longest non-stop flight of any bird. Birds in New Zealand were tagged and tracked by satellite to the Yellow Sea in China. According to Dr. Clive Minton (Australasian Wader Studies Group) "The distance between these two locations is 9,575 kilometres (5,950 mi), but the actual track flown by the bird was 11,026 kilometres (6,851 mi). This is the longest known non-stop flight of any bird. The flight took approximately nine days. At least three other Bar-tailed Godwits also appear to have reached the Yellow Sea after non-stop flights from New Zealand." 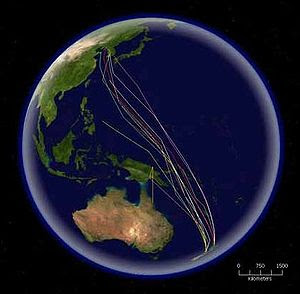 The routes of satellite tagged Bar-tailed Godwits migrating north from New Zealand
One specific female of the flock, nicknamed "E7", flew onward from China to Alaska and stayed there for the breeding season. Then on 29 August 2007 she departed on a non-stop flight from the Avinof Peninsula in western Alaska to the Piako River near Thames New Zealand, setting a new known flight record of 11,680 kilometres (7,258 mi).
Here are the images of the bird taken in Tinagat, Tawau.In the last picture, you can see that the bird's lower back and rump is heavily barred brown, indicating that this is the baueri race, the nominate race of lapponica would have white lower back and rump. 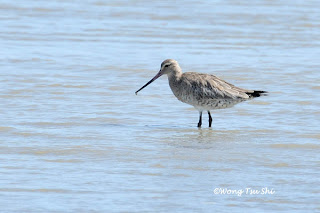 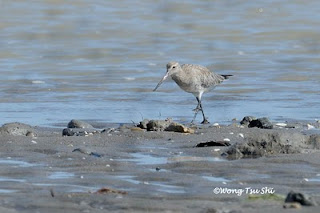 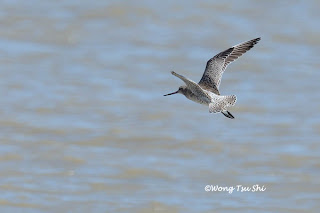 This is my new bird, however, due to re-identification of one of the birds in my bird images database, my bird count still remain at #305.
Happy birding.
Standard References for my blog