I photographed this bird which  behaved and acted exactly like a swallow/swift flying above the lake in Rainforest Discovery Centre, Sepilok, Sandakan. Suspecting it was a Needletail, I tried hard to take flight pictures of it in the dimming evening light. I was reward with a few viewable images.
After I viewed the images in my computer than I noticed how different it looked. I thought it was something new until I requested for ID help from Mr. Dave Bakewell, who kindly identified it as a  partially leucistic Pacific Swallow Hirundo tahitica.
Here is a brief explanation of leucism and albinism.
Leucism (or Leukism) Leucism is a very unusual condition whereby the pigmentation cells in an animal or bird fail to develop properly. This can result in unusual white patches appearing on the animal, or, more rarely, completely white creatures.

Albinism is a different condition. The easiest way to tell the difference between the two is that in albinism the eyes are usually pink or red, and albinism affects the entire animal, not just patches.

This occassionaly causes very excited biologists to think they have discovered a new species, when in fact leucism is the cause of the unusual markings they have seen.

Here are the pictures of the bird. 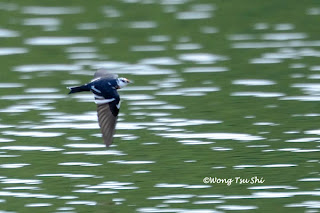 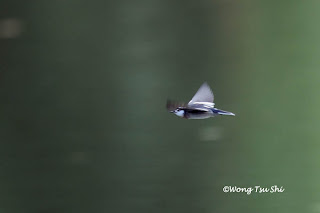