Most rails are secretive birds of the marshes, difficult to observe as they quickly run for cover in the reed-beds or wet thickets when disturbed.
There are two races of Slaty-breasted Rails Gallirallus striatus in Borneo, the northern race  G. s. striatus dark both above and below, perhaps especially dark in juvenile plumage, from the Philippines and Sulawesi to Sabah;  and the southern race G. s. gularis  a much paler bird with whitish throat from Yunan and Indochina to Sumatra, Java and Bali. The boundary separating the two forms in Borneo is unknown.
This could also be a possible winter visitor, one (possible migrant) entered a house at night in Bandar Seri Bagawan, Brunei , 16th January 1987 (Clive F Mann).
This bird is recorded in all provinces of Borneo, but its skulking nature undoubtedly results in under recording. True to its nature, this is the first time I have seen it and it is my number 303 wild bird of Borneo. 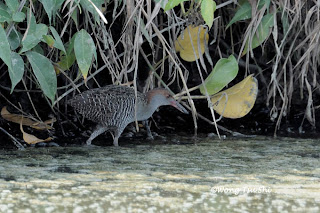 Photodocument of Wild Birds of Borneo #303

where is this Taiko?
nice capture..

Tinakat, Tawau, sifu. Only once, no more seen for the subsequent trips.