Black-headed Pitta Pitta ussheri, another endemic resident of  Sabah, in the west, south to the extreme north of Sarawak north of the line between Lawas and Meropok rivers, and in the west, south to the border with Kalimantan Timur, at the catchment of Sungei Sesayap and Sungei Mentarang, parapatric to Garnet Pitta Pitta granatina.
Parapatric means their ranges do not significantly overlap but are immediately adjacent to each other; they only occur together in the narrow contact zone, if at all.

Initially, this species was lumped with Graceful Pittta Pitta venusta in Garnet Pitta  Lambert and Woodcock (1996) split them as separate species.

It is very similar to Garnet Pitta except that it has an all black head while the later has the hindcrown to mantle bright red.
It is a very elusive bird, although having brilliant colors, it is a secretaive bird of the forest floor, and the casual bird watchers are very lucky if they chance upon one. I was extremely lucky to have taken its pictures  at RDC Sepilok, Sandakan, which is my number 302 wild bird of Borneo. 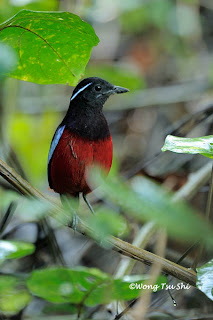 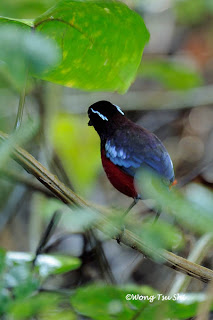 arent they just being difficult bird to get clear shot!!!
a typical scene...
nice!

I was lucky to see one at the Danum Valley Field Centre on March 17 2018. Beautiful bird!