Crested Jay Platylophus galericulatus of Borneo is one of the Iban omen birds, known as Bejampong, it is also known as  the Rain Bird  from its reputed faculty of fortelling a storm, by calling.
While Iban gods normally assume human form, they also possess mystical power of metamorphosis, and it is the special characteristic of Singalang Burung and the augural gods that they change into birds , in which shape they commonly present themselves to men. Singalang Burung, when he does metamorphose himself, always appears as a Brahminy Kite, or lang. But, as befits a high god, he does not deign to do this often, electing instead to make his will known to men through the agency of his menantu, or sons-in-law, who assume the forms of Rufous Piculet (ketupong), Banded Kingfisher (embuas), Scarlet-rumped Trogon (beragai), Diard's Trogon (papau), Crested Jay (bejampong), Maroon Woodpecker (pangkas) and White-rumped Shama (nendak). (J.D Freeman, Birds of Borneo, BE Smythis).
The race of Crested Jay in Sabah, P. g. lemprieri (Nicholson 1883), is much lighter in color than those from elsewhere of Borneo which are of the race P. g. coronatus, the bird  is tawny brown overall with bright white patch on side of neck, however, these two forms might not be readily distinguishable. Whereas, the South East Asian race of P. g. ardesiacus has blackish plumage.
Crested jay is a locally common lowland bird, usually in pair or small family group. I photographed the following  at slightly after 3.00 pm  in RDC, Sepilok Sandakan, the overcast sky on that day made the light in the forest very dim, I had to use ISO800 with aperture fully opened to f4 in order to get the shutter speed of 1/40s and 1/50s.
This is my number 301 photodocumented wild birds of Borneo. 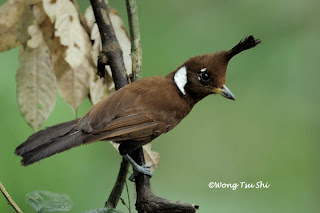 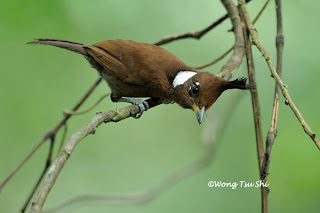 
Photodocument of Wild Birds of Borneo #301

Wong Sifu, thank you for a very informative material. As a tour guide, it has given me a better understanding of ritual birds in Borneo.

It's even heard in my area most of the time