Lesser Adjutant Leptoptilos javanicus is unmistakable in the field in Borneo. There is no other bird that looks like it , both in size and appearance. It was reported to be common in the old days, along the mangrove mudflats in coastal areas. Now it is quite rare and not easy to see one. Shooting is said to be the cause of its drastic reduction in Sabah.

This bird is reported to wander extensively. Sighting reports from lower Kinabatangan is quite regular, and it was once in Likas wetlands. This was in Tinagat beach Tawau, the first time we saw it there, and my lifer. There were three of them according to the locals but we only saw one there. 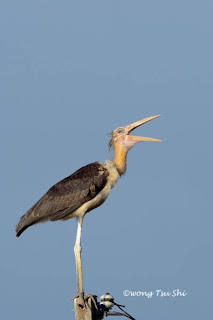 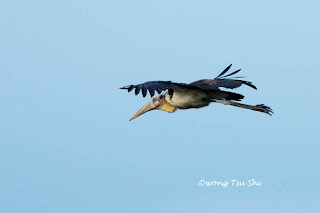