Life was easy  before their split in 2005 as all birds would be ticked as Oriental Cuckoo, resulting in a list of sightings pre-2005 which were not identified to race.

Oriental Bird Club does not follow the split by Payne (2005) and King (2005), and continues to list both as Oriental Cuckoo in its image database, so referring to OBI for identification tips is of not much help.

Oriental and Himalayan Cuckoo are virtually identical and best distinguished by call and size, however, migrating birds are usually not vocal in their wintering ground, again, size is another unreliable method in the field if only a single bird is present, thus the identification of this species here is more often a calculated guess. 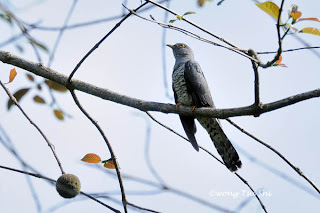 Thank you for the write-up.