Borneo has 2 positively confirmed resident ducks, they are Lesser Whistling Duck Dendrocygna javanica and Wandering Whistling Duck Dendrocygna arcuata, and 10 migrant ducks.
The only resident duck easily observed in Sabah is Wandering Whistling Duck, which is until quite recently a rare bird. It has established very well in suitable habitats in Sabah.
All the migrant ducks are rare birds, some species come regularly every year in small number.
The best places in Sabah to observe these northern visitors are in the west coast of Sabah, among the many paddy fields and fresh water lakes which are characteristic of the rural lowland landscape there. Promising places are in Tempasuk plain and Tuaran area.
Southern visitors only reach Kalimantan and have not been observed in Sabah.
Garganey Anas querquedula is the only migrant duck that has been widely recorded all over Borneo, and we managed to locate eleven of them in Tawau in early December 2011, (Historically, Tawau is not a good place to see migrant ducks as no previous observation was made there).
Some of the pictures below review the wing pattern which is the only reliable clue to sex them in this eclipse plumage. 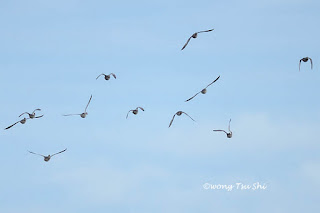 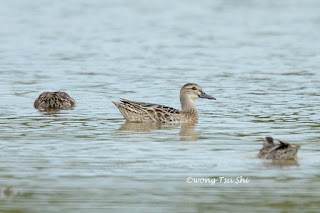 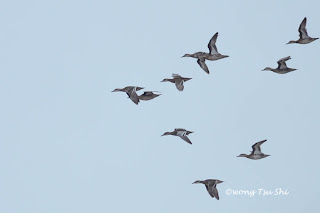 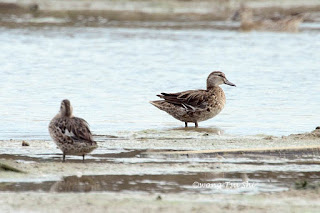 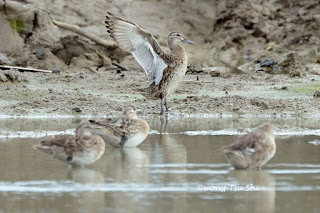 Garganey
﻿Tufted Duck Aythya fuligula is a rare visitor, a small number is regularly seen in Tuaran, Tempasuk and Penampang areas in Sabah.They are usually recorded in west coast of Borneo as far south as Kuching. We were lucky to chance upon these two males in Tawau, Sabah, in early December 2011. 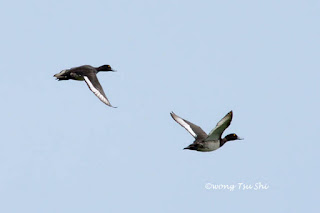 Very interesting write-up. Migratory ducks are just as rare here in the Peninsula.

so many garganey! ours here in peninsular is gone...that tufted duck has a scary look..hehe..