We were alerted of the presence of a Banded Kingfisher Lacedo pulchella by our good friend, Mr. Gary Albert, at the hanging bridge in Tawau Hills Parks last October.

Since I have not seen a Banded Kingfisher nor have it in my photo collections, we set out to try our luck there, however, luck was not with us despite a few visits. The Banded Kingfisher was heard a couple of times but was never seen, so must try harder in 2011.

Our attempts, however,  resulted in the following three Kingfishers.

Stork-billed Kingfisher Pelargopsis capensis innominata, however, this form is included in cyanopteryx by some authors. This differs from the Peninsular race by lacking the contrasting brown cap and side of head. The Bornean race is also slightly smaller at 35 cm compare to 37cm to 41 cm of the peninsular race. 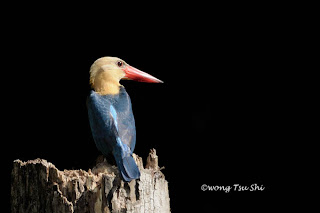 Stork-billed Kingfisher
Blue-eared Kingfisher Alcedo meninting verreauxi, a bird that is common along the Kinabatangan river and its tributaries, one of the star birds on any visit there. I am glad that it is also here at Tawau Hills Park. 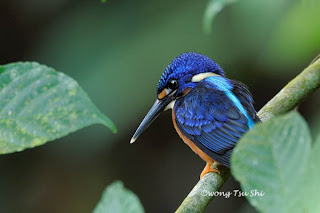 Basically there are two forms in Borneo, the form that is shown here, being the commoner one with darker wings and a rarer form with rufous wings, and out of these two forms there exist many variable plumages and many features that are evident of cross hybridization. As a result you would see authors using Black-backed Kingfisher Cyex erithaca , Rufous-backed Kingfisher Ceyx rufidorsa motleyi and Oriental Dwarf Kingfisher Cyex erihaca and/or Ceyx rufidorsa in their various books for this sepcies. 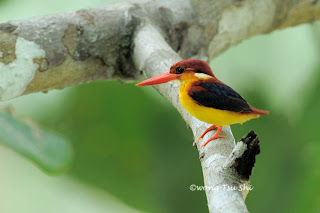