I was in Kota Kinabalu for some personal matters and took time off to photograph some birds with Sifu Jason, Sifu agreed to fetch me to visit all those interesting places and thanks to him, I managed to get three lifers in 24 hours.

First we got this Black-headed Gull Larus ridibundus (my lifer) at Tanjong Aru at late afternoon, when the sky was heavily overcast and a storm was brewing. There were about ten of them there, in winter plumages and mostly first winter birds, flying above the shallow sea  occasionally diving for the surface for food.

Black-headed Gulls are very scarce winter visitor to coast of northern Borneo, however, despite scarce, they are quite regular along coasts of Sabah during the migratory season. 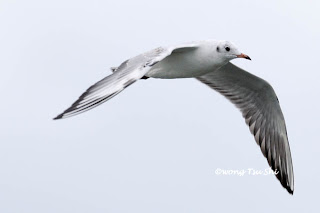 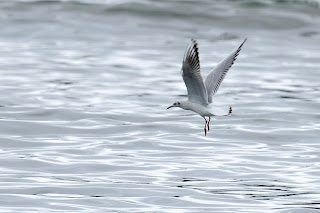 Black-headed Gull
Common Teal Anas Crecca (my lifer) was photographed at Tuaran the next morning. A pair was seen there, the male bird was in the process of moulting into summer plumage, leisurely preening amongst the thick weeds growing on the unplanted paddy field.

Common Teal is a vagrant of Borneo, 4 records before this, only one from Sabah at Padas Damit in December 1984. This is the second record in Sabah. 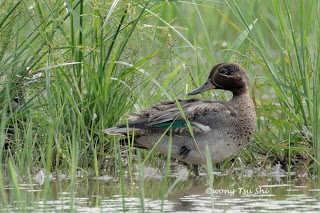 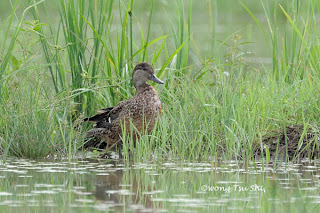 Common Teal - Male (top), Female (bottom)
A Common Kingfisher was also feeding from a stick placed in the middle of the flooded paddyfield. 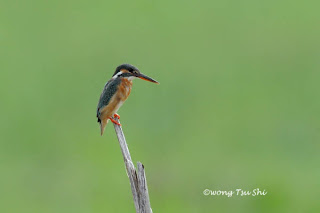 Common Kingfisher
After photographing this beauty, we left to look for the earlier spotted Garganey Anas querquedula , Northern Shoveler Anas clypeata and Tufted Duck Aythya fuligula but they were no where to be found. Hope they have made their way back to their respective homelands and not trapped and ended in dinner plates of some uninformed farmers.

Hoping to have a glimpse of the Buff-banded Rail Gallirallus philippensis, Tampasok plain was our next destination,  this bird too was not seen but the place was rife with activities.

A group of otherwise foraging Black-winged Stilt Himantopus himantopus took flight, flashed by the fastest raptor in the world from above, the migratory Peregrine Falcon Falco pereginus, who was looking for lunch.


Its lunch was an unlucky White-breasted Waterhen Amaurornis phoenicurus. 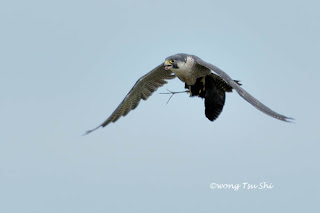 Peregrine Falcon
Yellow Wagtails Motacilla flava, an abundant passage migrant,  can be seen in some open fields in Tawau, where it is often seen singly, in Tampasuk, they are all over the place, all seen were of the race tsuchutschensis,  flying and perching on dried paddy straw. 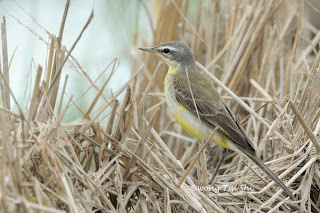 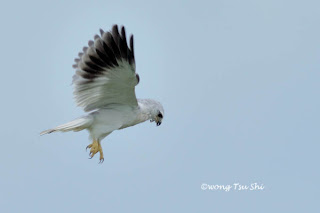 Black-winged Kite
We too went to lunch and later dropped by at Lok Kawi. We were handsomely rewarded with this rare Chinese Egret Egretta eulophotes (my lifer), which I have been trying to photograph for quite a while. This elegant looking bird was oblivious of our presence while busy feeding close to the shore. 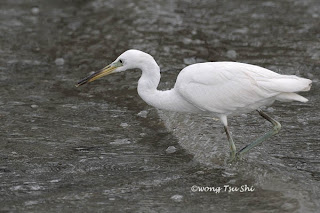