Brush Cuckoo Cacomantis variolosus sepulcralis is an uncommon and local resident of lowlands and lower montane forests in Borneo.

Quite similar looking  to the commoner Plantive Cuckoo Cacomantis merulinus, except for its rufous throat against the grey throat of the Plantive, other than this the plumages of the two birds look very similar.

Brush Cuckoo has a Wee-fu-wee, wee-fu-wit call which sounds very similar to one of Plantive Cuckoo's calls.

This is my new bird photographed in Tawau, it flew in for a few seconds and left, than was heard calling from far away never to return for another shot. 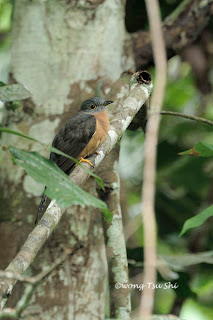 Taxonomic note: Treating this as a sub-species of C. variolosus follows Mann (2009).

Nice sifu and I have not seen this species before. Probably only on your place ...

Thanks Paul and Jason. This is the first time I saw it in Tawau, but apparently it is seen a few times by Ku over Tawau areas.