Monitors are the largest of the living lizards. They are swift and active predators of small mammals, birds, bird eggs,  reptiles, amphibians, as well as invertebrates. The Water Monitor Varanus salvator, growing up to 3 meters in length,  is one of the three largest lizards in the world. I have seen large Water Monitors along the tributaries of Kinabatangan, which easily measures up to 3 meters,

Tree Monitor Varanus rudicollis, on the other hand, only grows to about 1.5 meters, half the size of the Water Monitor.

It is a dark, rough necked monitor, widespread in the lowlands. However, many people might not have seen one as it inhibits the forests.

Water Monitor, on the other hand, is widespread but also inhibits in urban environments like rubbish dumps, urban marginal swamps, sewage drains and moonsoon drains adjacent to motorways, is regularly seen and is the commonest road-kills.

This young Tree Monitor was under the claws of a  Changeable Hawk Eagle Spizaetus cirrhatus, but it was too big and heavy for the bird to lift it up into the air. The bird abandoned it while we were approaching. It was quite exhausted and we managed to take some photos before it disappeared itself into the thick undergrowth. 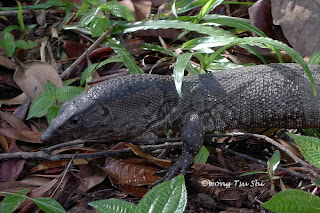 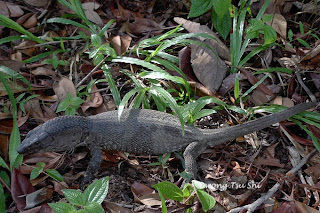 Tree Monitor
Compare to the following picture of a Water Monitor. 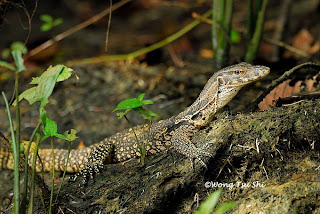 Water Monitor
And the Changeable Hawk Eagle that lost its dinner. 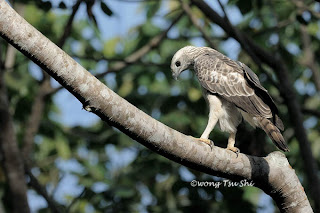 Thanks for the photos of this rarity. I'm glad it escaped apparently none the worse for wear!

Hi Dave, thanks for visiting from Sydney, Downunder.

Amazing find. V rudicollis indeed is rare..thats a nice shot u goot there. I've yet to see it..

Hi there. It's because of this photo I managed to do a comparison with the common water monitor.
I just saw it today around noon at Poring Hot Springs, on the way up the canopy walk, attached 90 degrees on a Seraya tree. About 20-25meters high up. The unmistakable one with full of spider webs beneath it. I forgot the meter mark sign board. The one most people pose for photo under the tree.
I feel so lucky! First time seeing it!