It is generally uncommon and usually found in small parties feeding in mid-storey. It could be underecorded as its call , an up and down series of notes : do-di-do-di-do-di-do, is one of the commonest one can hear in the Sabah forest.

It is a similar looking bird to the Mangrove Whistler Pachycephala cinerea, but should not be mistaken in the field because of distinctive habitats and songs.

Myers lists this as monotypic, while Mann follows Smythies while maintaining that the race eriphaea might not be valid as the boundary between the two forms is unclear and they are also poorly differentiated.


One observation is that Phillipps does not list this in both his Common name and Scienticfic name indices in his book.

This bird was photographed in Tawau (my new bird), one among the small party that came to feed. Like other babblers, they are active birds and to get a sharp and infocus shot is a real test to your skill. 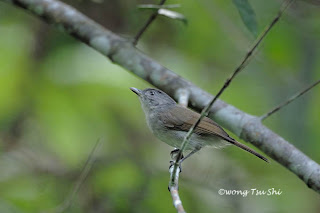