Ruddy Kingfisher Halcyon coromanda is not an easy bird to see in Borneo, it is commoner in north-east Sabah than anywhere in Sarawak where it is rarely seen. It has been collected from coastal, island and inland localities and from mangroves, swamps and old rubber plantation.

H. c. major is a slightly larger bird at 25 to 27 cm compared to 23 cm of H. c. minor, however, since this species always occur singly, ascertaining the race by size alone base on a solitary bird in the field can be deceptive.

During the duration of the just concluded Borneo Bird Festival in October at Rain Forest Discovery Centre in Sepilok, Sandakan, one bird was seen every day feeding at a small pond next to the Woodpecker Avenue. It was the star bird of the Festival, keeping both the bird watchers and bird photographers waiting by the pond to take a good look/image of it. 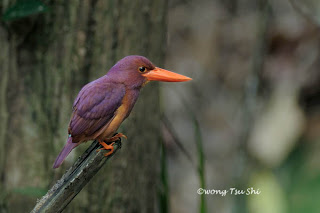 This image was taken there during the Festival (my new bird). It is of the resident race H. c. minor because of the following distinctive features:-

1. Rich purple wash on the upper parts compare to orange or ruddy-brown for H. c. major,

3. Purple tinged breast which is absent on H. c. major.

What happen to the one you take very-very nice one? but this is one is very nice.

A good read with gorgeous capture!!

Wow Nice photo of this beauty!
It looks so different from the one in Japan...more like a Purple Kingfisher rather than Ruddy!

Denis, this is the only one I got.
Paul, thanks.
Unravel, yes the color is so much different from the H. c. major in Japan.

sifu... this is the best matched colour(True colour) of this bird of all been posted earlier. the best i've seen so far of the this RDC resident. well done.

Thanks a lot, Ron.

Mr. Wong, what does this bird feeds on ?