Fruithunter Chlamydochaera jefferyi is endemic to Borneo where it is a decidedly local montane species (700–3,200  m),  occurring  in  Sabah  and  Sarawak (Malaysia)  along  the  highland  chain  from  Gunung Kinabalu  to  Gunung  Mulu,  and  also  Gunung  Dulit (Smythies  and  Davison  1999).  In  Kalimantan (Indonesia) it has been recorded west to Gunung Nyiat (Prieme and Heegaard 1988) and south to Bukit Baka Nature Reserve (Rice 1989). It is an aberrant, strikingly marked, thrush-like bird occupying a monotypic genus that was once linked with trillers Lalage or orioles Oriolus (MacKinnon and Phillipps 1993), but is now thought to be associated with thrushes Turdinae (Ames 1975, Ahlquist et al. 1984), or cochoas Cochoa (Olson 1987). (Forktail 18, 2002).

It is not recorded in Kelabit Highland in Sarawak.

It is an unmistakable bird in the field, its black and buff pattern on the head and black breast are diagnostic. When sitting, their position is pigeon-like, but when they congregate at berry trees, they act much like bulbuls. They also resembles laughingthrushes in some behaviors and often occur in pairs. Their flight is like that of a campephagid, in that they dip their pointed wings in and out rather than flap.

This pair is photographed in Rafflesia Centre, Tambunan, my new bird. 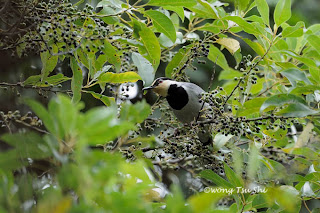 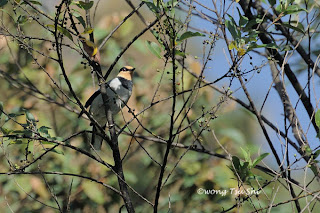 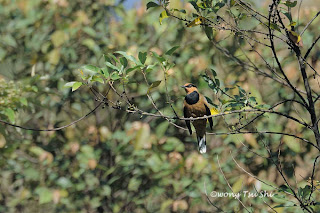