Eyebrowed Jungle Flycatcher Rhinomyias gularis is an endemic of Borneo, it is a common montane resident along the north-central mountain ranges from G. Kinabalu to G. Murud and G. Menyapa.

It was previously lumped with three races of Jungle Flycatcher found in the Phillippines, split by Wolters (1980) from the Phillippines forms as an endemic monotypic species.

It usually perched on the lower branches in the lower storey and hunt close to ground, it moves on the ground and through the undergrowth much like a thrush.

It can easily be seen and photographed in bushes behind the Liwagu Restaurant in Kinabalu Park. These images of this endemic species, my new bird, were taken there. 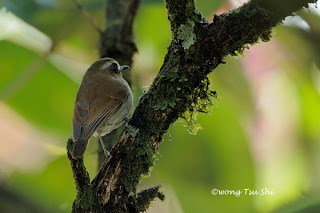 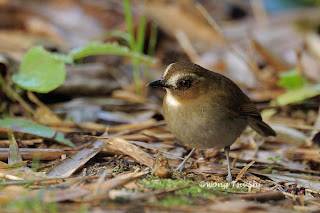