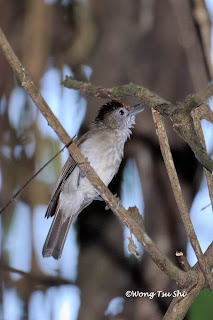 Rufous-crowned Babbler
This White-crowned Shama Copsychus stricklandii was perched in the open while looking for breakfast. White-crowned Shama is endemic to Northern Borneo, where it is replace by  White-rumped Shama Copsychus malabaricus south of Sabah, and the range of these two species overlaps from Lawas to Sg. Padas in the West, and from somewhere between Sg. Sekatak and Talisayan in the East Kalimantan (Holmes and Burton 1987) to Danum Valley (Kiew 1977), Darvel Bay and the Semporna islands on the east. D. Wells (in Kiew 1977) noted a few specimens from Danum Valley have crown feathers tipped in black, suggesting hybridization among the two. 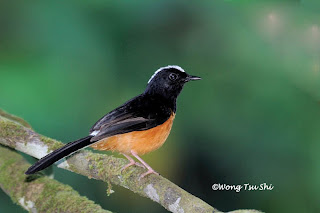 
A family of Smooth Otter Lutra perspicillata was  swimming upstream along the Lipid River in search for fish. 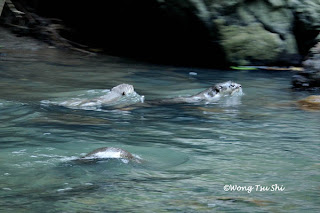 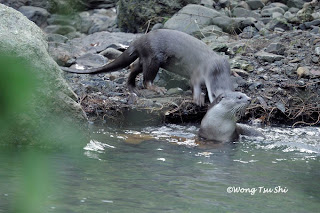 Smooth Otter
This Nymph Butterfly was basking in the morning sun. 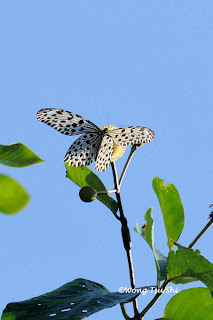 This Wallace's Hawk Eagle Spizaetus nanus must have caught a rat from the oil palm plantation, it was well hidden among the leaves on this tall tree. There could be a nest with chicks somewhere near here as it flew away with its prey tightly in its grasp. 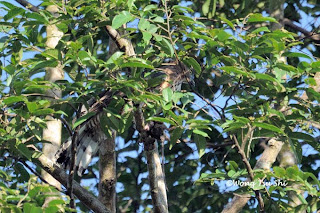 Wallace's Hawk Eagle
A family of Bornean Gibbon Hylobates muelleri was feeding on young shoots at the canopy quite a distance away. Bornean Gibbons are endemic to Borneo, dwell in the lowlands and hills, up to 1,500 m on Mt. Kinabalu, usually found in small groups of one adult male, one adult female and up to three young. Bornean Gibbons are often heard as their unmistakable laud calls can be heard miles away in the forest, however, as they dwell on tall trees they can be difficult to spot and even harder to photograph. 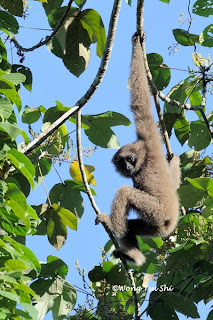 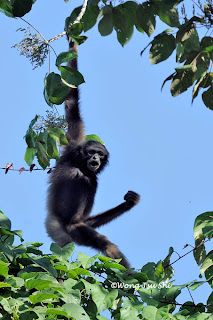 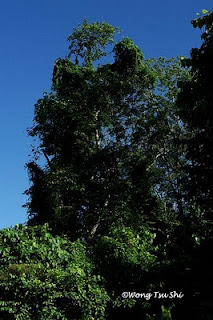 Can you see the Gibbon?


We continued along the road and this Indian Black Eagle Ictinaetus malayensis flew overhead. 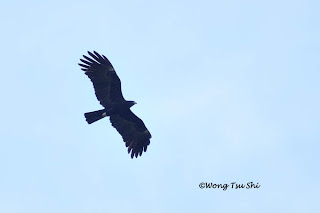 Indian Black Eagle
This group comprising photography Sifus were in front of us. 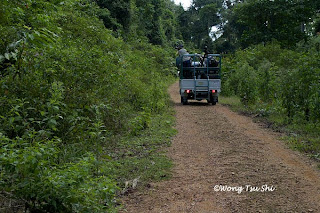 We carried on and saw a bird hopping along the road, from a  distance we thought it was a Yellow or Grey Wagtail, but decided against it later as it did not have the characteristic white outer tail  feathers of a  Wagtail. So we stopped the car to investigate, and very much  to our delight we found it to be a different bird and another lifer for me (#295), the Eyebrowed Thrush Turdus obscurus. When migrating this bird can be found both in the lowlands and montane forest in Borneo, we saw  a number  of them foraging along the road in Tabin on that day. 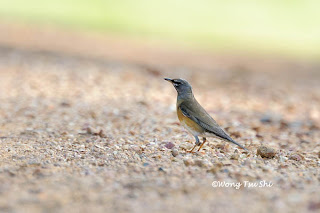 Eyebrowed Thrush
This Verditer Flycatcher Eumyias thalassina was perched in the shade far far away. 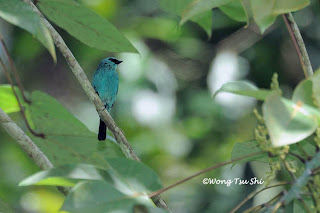 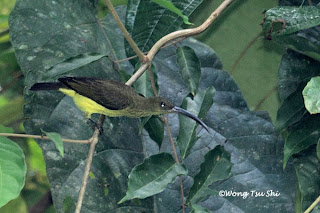 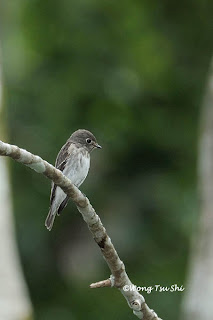 
I have taken pictures of Bornean Forktails in Kinabalu Park, which look much larger and have longer tail then the White-crowned Forktail we saw here. 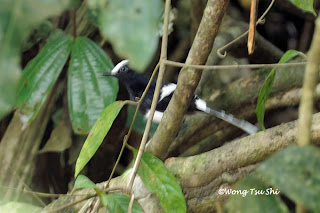 White-crowned Forktail
After lunch, we made a trip to Lipid Mud Volcano via Tomanggong Road. There were a few White-bellied Munia Lonchura leucogastra among the flock of Chestnut Munia Lonchura atricapilla feeding in the tall grass along the road.  White-bellied Munia are much rarer than Chestnut Munia, they are also very very skittish, will fly off at the slightest movement and sound. This shot was taken by hand holding my DSLR with the 600mm lens (without VR), glad that it looks acceptable. 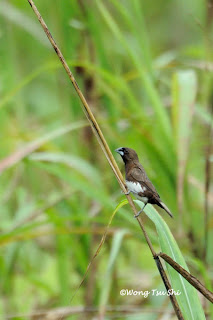 White-bellied Munia
The 700 meters trail from the Tomanggong Road to Lipid mud volcano was muddy and wet. However, Wellington boots provided by Tabin Wildlife Resort saved the day. The mud volcano is huge and more than 10 feet tall, as nothing grow on it so the area provides open and unobstructed view of all birds flying over the area. 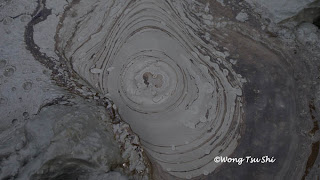 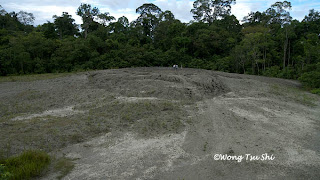 Lipid Mud Volcano, see its size with the human on it.
These Green Imperial Pigeon Ducula aenea were perched on a tree at the edge of the mud volcano. 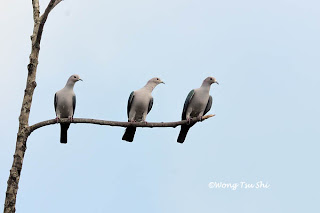 Green Imperial Pigeon
This pair of Wreath Hornbill Aceros corrugatus flew by in a distance. 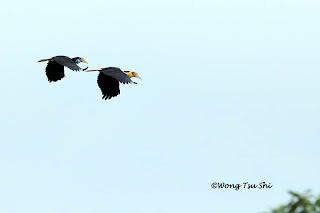 Wreath Hornbill
End of Part 2, to be continued. Happy birding.

Have another check of your Wallace's and your Brown-streaked Flycatcher. I think they are Oriental Honey-buzzard and Dark-sided Flycatcher respectively.