Our photography sifu from Tawau, Mr. Winston Tai organised a group of photographers to visit Tabin Wildlife Reserve for a 3D2N trip, from 27th to 29th November 2009.


Our group from Tawau consisted of Winston Tai, Kan NJ, Datuk CK Hon, Kong Ket Leong, Liew Lun Fatt, and myself. Andy Choak and YC Lee comprised the other group from Sandakan. Both groups departed at 6.00 am and met at Lahad Datu for breakfast.


Unlike our visit last year, the Tabin Road has been resurfaced with gravels and is in  good shape for 4WD vehicles, this is the road we took instead of the Permai Plantation road.


Not long after passing the main gate to Tabin Wildlife Reserve, we encountered a flock of feeding Blue-throated Bee-eater Merops phillippinus, hawking along the access road between the oil palm plantation on one side and secondary forests on the other. I have seen them in Sandakan, Kinabatangan and Penampang but not in Tawau, so Kong, Liew and myself stopped to take pictures of them while the other cars continued on to the Tabin's Reception office. 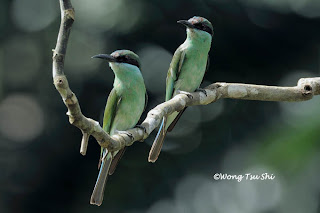 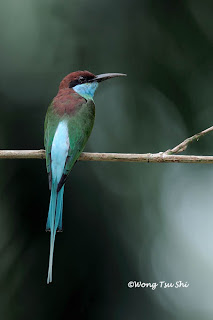 While the Bee-eaters were hawking for flying insects on the wings, I spotted this Grey-cheeked Bulbul Criniger bres in  the shrubs near the forest. Grey-cheeked Bulbul looks very similar to the montane Ochraceous Bulbul Alophoixus ochraceus. Apart from habitat difference, Grey-cheeked Bulbul  has less prominant crest, yellower underparts and buffy undertail converts. 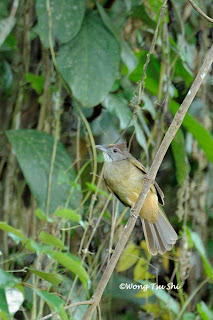 
After we had enough of the Blue-throated Bee-eater, we moved on to find this lone juvenile Tiger Shrike Lanius tigrinus caught a grasshopper in the shrubs beside the road. 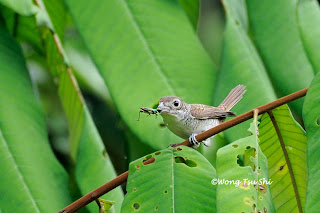 During the guests registration, Resort manager Mr. Fernando informed us that there were a number of fruiting fig trees in the Resort and along the Lipid River, which was delightful news to us as the fruits would bring a variety of birds to the Resort.

While waiting for lunch, we were entertained by the feeding of Scaly-breasted Bulbul Pycnonotus squamatus (my lifer), Red-eyed Bulbul  Pycnonotus brunneus and a 1st winter male Blue-and-white Flycatcher Cyanoptila cyanomelana on top of the tree adjacent to the restaurant. Scaly-breasted Bulbul has been photographed regularly by  photographers in Poring, Ranau, during the flowering and fruiting season, and we were more than happy to see it here in Tabin. 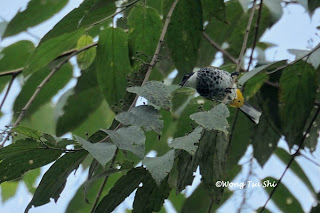 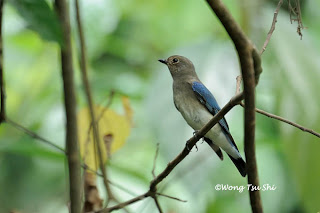 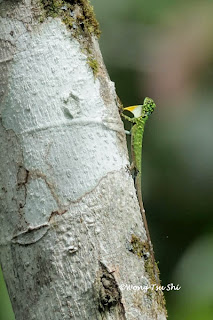 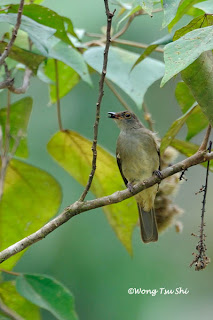 Than, more than 100 meters away, a very skittish flock of Slender-billed Crow Corvus enca, took off right after I took this shot. 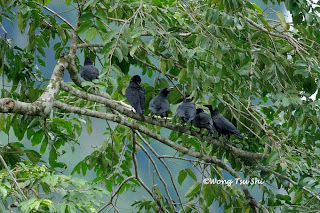 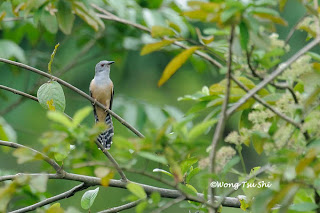 An Oriental Pied Hornbill Anthracoceros albirostris flew overhead. It was too big for my camera. 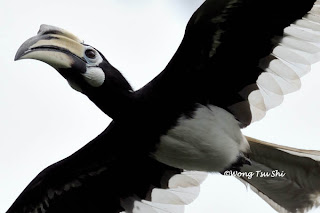 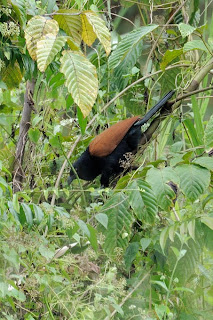 Along the Lipid River, the fruiting fig trees brought a number of  small birds, but I only managed to catch decent shot of the Velvet-fronted Nuthatch Sitta frontalis. 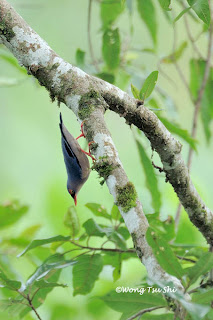 Encountered this Grey Wagtail Motacilla cinera along the road near a stream. Grey Wagtails winter in both lowlands and montane forests of Borneo, but thy are more commonly found in montane areas of Borneo in the Northern winter. 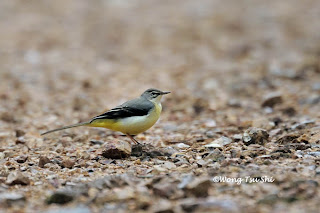 The road going to the Core Area is in a very well kept condition and with a 4WD, our birding trips going up and down the road are like a piece of cake. 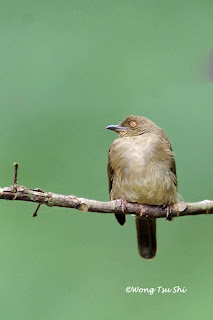 On our way back to the resort we saw some Smooth Otters Lutra (Lutrogale) perspicillata drying themselves on the bank of Lipid River. 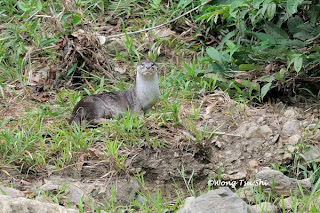 End of Part 1, to be continued. Happy birding.

Photodocument of Wild Birds of Borneo #294