There was a seminar on 20th November 2009 in Kota Kinabalu I wanted to attend and went there on the night of Thursday (19th November). Touched down  KK at 11.00 pm after flight delay. Spent the night resting at Capital Hotel.

Woke up next morning, at first wanted to go to take a look at the sea front to try my luck but saw these instead right outside the hotel window on a tree along Jalan Tun Razak. Have to take pictures of them as I find Pink-necked Green Pigeon Treron vernans are not that common in Tawau. 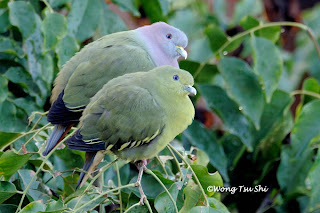 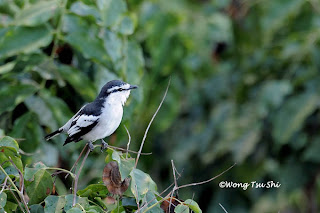 After taking the shots of the above from my room, I went to the sea front but there wasn't much activity there. Took picture of this landmark Blue Marlin along the sea front for record. 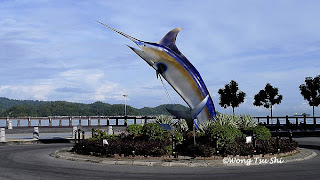 The morning until 2.00 pm was occupied by the seminar. Fetched Sifu Karim at about 2.30 pm at Tanjung Aru Town and went straight to Tanjung Aru beach to photograph the famous resident feral colony of Blue-naped Parrot Tanygnatus lucionensis. Here it is, my first lifer for this trip. Blue-naped Parrot occurs naturally on Si Amil, Maratua and Mantanani islands, but population on Mantanani has been extinguished, their best hope now is in Tanjung Aru. (Phillips, 2009) 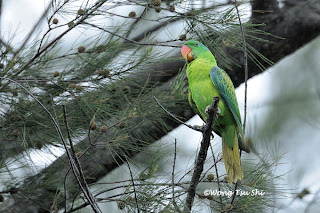 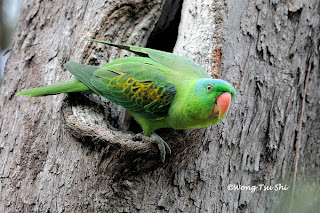 After photographing the Blue-naped Parrot, we left for Penampang to look for Snipe. Snipes and other migratory water birds that frequent the inland fresh water fields, marshes and swamps during  northern winter are not easy to find in Tawau as there is virtually no padi field in Tawau. We reached our destination and found the sky was overcast. 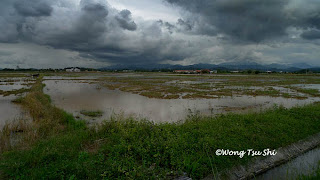 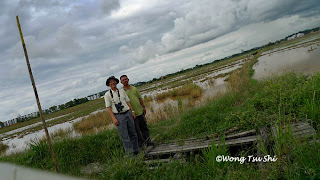 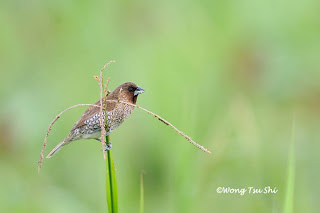 Scaly-breasted Munia
On a branch far far away, this Peregrine Falcon Falcon peregrinus  perched. Peregrine Falcon is reputed to be the fastest raptor in the world,  stoop speeds certainly reach 160 km/h, sometimes possibly 250 km/h (on occasion allegedly 400+ km/h), feeds mainly on small birds and bats. Borneo has its resident Peregrine Falcon race (F. p. ernesti) which is a rare bird in montane forests. and in hilly areas of lowlands This bird is the migratory race, and my 3rd lifer for the day. Phillips mentioned that migrant race as peregrinator (Phillips, 2009), whereas the more popularly accepted race migrating to Borneo is either F. p. japonensis or F. p. calidus, where the latter is a little paler than the former. 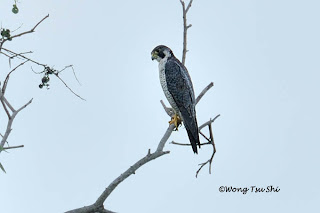 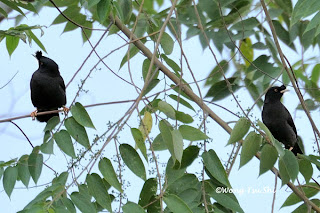 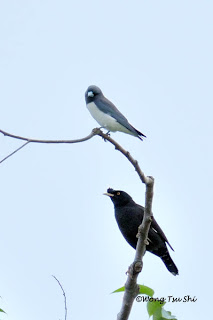 Crested Myna below a White-breasted Woodswallow
As the light began to fade, a pair of this rare bird flew in, albeit perched far away, its appearance was totally unexpected, a real bonus. The Blacked-collared Starling Sturnus nigricollis (Now Gracupica nigricollis) (5th Lifer) is a large bird, as big as a Hill Myna (Now Common Hill Myna) Gracula religiosa and a scarce vagrant in Borneo. 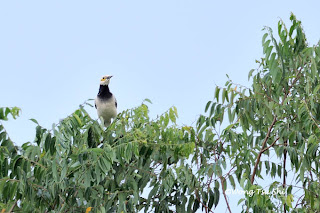 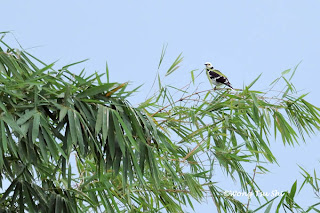 Happy birding.
End of Part 1, to be continued.