Thanks to sifu Horukuru, who mentioned today  in his blog that there was  sighting of Aleutian Tern Sterna aleutica (Now Onychoprion aleuticus) now in KK Water front yesterday.

I remember shooting some photos of Terns on my recent trip to Semporna on 11th  September 2009, of which some photos have not yet been positively identified. This news prompted me to take a look at those photos to figure out whether I have this species in the photo collection.

As I usually id  my birds by first referring to the commoner species, only if they do not match than I compare them to rarer species in my field guides . I manage to id the other 2 species that I photographed as Great Crested and Common Terns. The remaining bird has black lores line to the base of the beak, this feature is only represented by 2 species in the Mackinnon field guide, they are Bridled Tern and Sooty Tern. But the wings of this bird is too bright to be a Sooty, so I tentatively thought it might be a Bridled, as both these species have been long listed in the Borneo Checklist. After reading Horukuru above, I decided to recheck.

Identification of this species per Craig Robson is by whitish crown, dark band along underside of secondaries for adult non-breeding plumage and Blackish bill/legs, white forehead/cheeks, grey below, broad white edge to inner wing, pale inner primaries, dark secondary band on underwing for breeding. True enough there is prominent dark band along underside of the secondaries of this bird, and the other features match, so I conclude that it is indeed an Aleutian Tern . Photographed using Nikon D300 and Nikkor 70-200 mm f2.8 with 1.7X TC in a boat off Semporna. 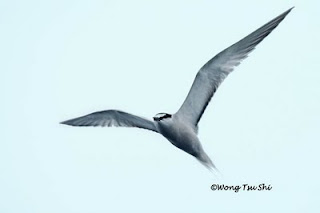 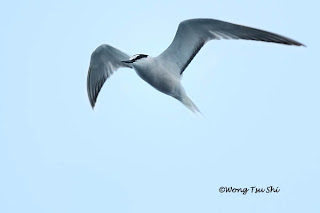 
However, it was recorded in Sarawak on 9th April 2005 (Sim & amp; Mizutani 2005). According to An Annotated Checklist of of the Birds of Borneo (Mann 2008), little was known of the wintering areas of this species until recently, but it is now known that many spend the winter around the coasts of southeast Asia and the Greater Sundas, and thus it may prove to be regular non-breeding visitor to Borneo. Specimens have also been caught in central Philippines.

Great pics! I'm writing up the occurrence of the KK birds for BirdingAsia and would like to make refernce to your birds too (the first Aleutian terns for Sabah!) and maybe use the pics as well, what do you think? Chris Kehoe (UK)

Hi Chris, I have no problem for using the pic in BirdingAsia.

The information here is great. I will invite my friends here.