Further to my post of photographic record of Great Egret Ardea alba breeding in Sabah here, the photographs of which should have been published by Suara Enggang now (I am not sure as I have no access to the publication). We located another heronry in Tawau, this is a new site as the old site (the one I took the earlier photos) was cleared for developmnent some time ago. The same occupants as before are found here, they are breeding Black-crowned Night Heron Nycticorax nycticorax, Great Egret and occasionally Rufous Night Heron Nycticorax caledonicus.

We photographed this breeding pair making their nest during our visit in early May 2012, there were quite a number of Great Egret pairs building nest there at that time, this nest was the nearest to us for purpose of taking photograph. 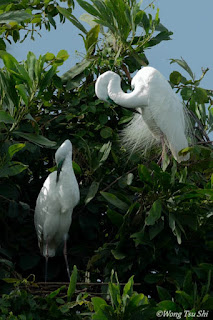 The following two images were taken one week later, clearly showing the top side of white eggs﻿ and an adult incubating them with the other standing nearby. 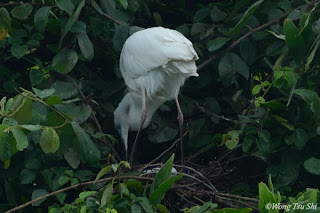 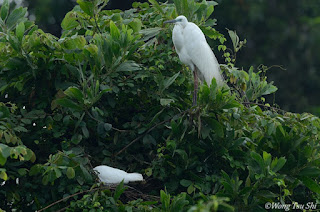 Due to work and other commitments, we did not go back to check them in June and July. On 4th August 2012, we went back to see whether the nesting was successful, we were delighted to see one nest containing three chicks, they were quite large and should fledge soon. We could not be sure whether this was the earlier nest due to growth in surrounding branches.
﻿ 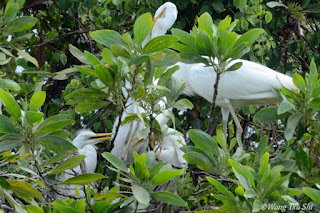 ﻿
There was another nest further away containing one chick, however this chick looked much smaller/younger than the other three. 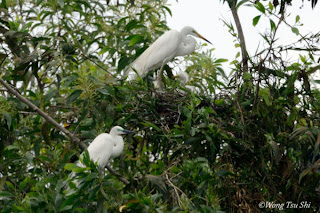 There were other nests seen that day, with likelyhood of more chicks coming.

ya, hard to see such breeding plumage, Suara Enggang is not ready yet, the editor team seemed to have some probs, maybe lack of manpower, but they are trying to get that done and send to us soon. Will look forward for it as well. Very nice record, hopefully we could recover some breeding population on West Malaysia as well.