Great Egrets Ardea alba (Casmerodius alba) is a very common bird of Sabah. It can be found in coastal lagoons, beaches, shores, paddy fields and river banks. It is also the largest egret in Sabah, both as a winter visitor and also a local breeding resident, see photo here. A brief write up of its breeding in Sabah will be appearing in Suara Enggang, being the first photodocumented breeding of this species here.

It is easy to distinguish this species from the other white egrets occurring here, so its features will not be elaborated. It is so common here that there seems to be nothing more to write on them,  however, the following image taken by me in Tawau in November 2011 changed that. 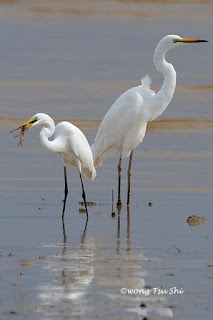 There are four essentially allopatric subspecies: alba (southern Palearctic from central Europe to Russian Far East), modesta (India to northeastern China and Japan to Australia), melanorhyncha (sub-Saharan Africa and Madagascar), and egretta (North and South America). At present, some authors split the old world Great Egret into Eastern (A. a. modesta) and Western (A. a. alba) Great Egrets. The split is still strongly disputed by many and is not widely accepted pending further and more convincing research. For the purpose of my little piece here, we will treat them as subspecies and not distinct species.

Historically all birds in Borneo are of modesta race, there has not been any record of alba race in Borneo and in Malaysia. However, when Chris Kehoe saw this image, he alerted me that there could be a bird of the alba race due to its larger size and paler legs. As the two races are extremely similar, we could not be absolutely certain without looking at further photographic evidence.   I have deleted all the other photos taken on that day leaving this one as it shows the range in size of the two egrets nicely. I could not remember having any impression of a larger bird while photographing them, so this could very well be a normal sized bird with a smaller one. But than again I have deleted all my other photos, so nothing further can be done from here.

I write this piece here to alert birders in Borneo to pay attention to any peculiar looking Great Egret they come across, it could be the alba race, which has not yet been recorded here.
According to Brazil in Birds of East Asia, the alba race;
a. is larger than modesta,
b. has pale or bright yellow tarsi and toes in winter plumage, and
c. has been noted to winter further and further south of their usual range (C. Honshu to Kyushu and Korea), so it might accidentally land on the west coast of Sabah, just like the Red-billed Starling did in December 2011.

While size difference is a distinguishing factor, bear in mind that size in images can be deceiving as seen in the following two images, which are of the same birds but appearing vastly different in size in each image. 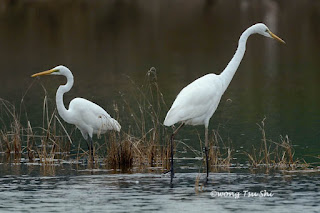 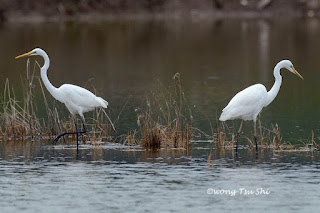 
Standard References for my blog.

Excellent write-up Wong! Now let's see if any can be detected next winter! I think, if anywhere, Sabah would be the most likely place to host an 'alba'.

Thanks, Dave, hope we can eventually have an 'alba'.

Very interesting. Must keep a lookout for this greater Great Egrets.

The examples in the following, the Great Egret looks larger when it was nearer to the camera, but from the suspected alba and modesta shot, we can see that the larger one is actually behind the smaller one if we check the legs, resulting in even larger size difference when we put them side by side. But egrets are highly confusing with their length of neck that is stretched out or pulled back, so the body itself, estimating the mass is a much reliable way to compare sizes, it is noticed that side by side, Little and Intermediate's size difference is not very big, but Intermediate's longer legs and longer neck easily make it a lot larger than the Little Egret in direct comparison, seen them flying side by side before and can only notice longer wing span, longer legs and bulger "pouch"(the neck). But this photo show two birds with rather different body mass, head size as well as the much wider legs. Definitely interesting sight.