Breaking the egg or "pecah telor" in Malay, is not exactly what it literally means, no babbler's egg is broken here.

When a sport team or sportman scores nothing, we say they/he "makan telor", or eat egg. The "0" is the shape of an egg. So when the score line is broken, the egg is said to be broken.

I have been eating egg since the biginning of 2012, for four months I have not been able to photograph a wild lifer (my last wild lifer was the Yellow-rumped Flycatcher  Ficedula zanthopygia in December 2011).

On 1st of May, I managed to break the four months old egg by scoring this lifer .

Sooty-capped Babbler Melacopteron affine, common resident throughout lowlands with preference to secondary forests and forest edges. Being a babbler, it is not easy to take its photogrpah. I was lucky as this one came to feed in the low bushes on the road side.

It is very similar to Moustached Babbler (Malacopteron magnirostre), but lacks the distingusihing black moustachial stripe, and has brownish grey cape and nape instead of blackish grey. 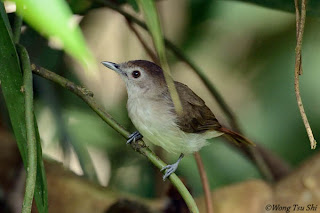 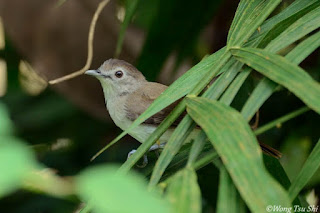 Congrats. A bird which is not easy to spot but it certaintly has a pleasant song.