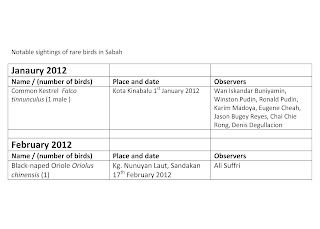 Edited to add:  Many thanks to Master Sifu Ck Leong who wrote in to update "Common Kestrel female at Brunei river by CK Leong and Roger Rajah on March 05, 2012".

Edited to add on 5th April 2012: As I do not know how to upload a Word file here.A Word file with clickable link to the relevant images is at Borneo Bird Images Document list.

Funny that the balck naped is so commmon in the Peninsular, my garden bird.

Very useful summary Wong - thanks! May I suggest another column? One with a URL to the original data source (even if it's to a FB account, it's still useful and saves a lot of time for the person wishing for more details!).

Excellent suggestion, Dave, will do ASAP for benefits of all. Will update the last quarter sightings as well.

The name Black-naped Oriole is remained for the Philippine nominated form (chinensis)and allies. Interestingly, with the black on the wing of this one taken in Sabah, it looked like a Philippine "chinensis", which would not be too surprising as Philippines is technical a wind-blow away, I think this had to be treated to identify up to its subspecies.

Although these 3 forms are shown by molecular analysis to be distinct, they are not popularly accepted as splits yet due to other intermediate subspecies in Philippines/Indonesia had not been included in the studies and they cannot be placed into the right species is the split is recognized, they will be either free standing or had to temporarily assigned to the most potential one until more information are available.

If this Sabahan record is proven to be a "chinensis", we may be lucky to have all 3 species when the split is finally confirmed.