Red Junglefowl Gallus gallus, the ancestor of our domestic chicken, a common bird of Peninsula Malaysia was non existent in Borneo until recently, a rather odd phenomenon since Borneo has more than ten pheasant and partridge species.
Some years ago, more than ten to be more precise, (one blogger first saw them here in 2000)  they were introduced from Peninsula Malaysia to some of the east coast plantations, particularly in FELDA settlements in Lahad Datu, no idea though as to how they were brought in, whether in the form of eggs, chicks or adult birds. They have since established remarkably well in some localities. Visiting tourists often encounter group of foraging birds in Tabin Wildlife Reserve in Lahad Datu, for example.
They should be a common sight if one has a chance to visit some of those huge expanse of oil palm plantation in FELDA settlements in Lahad Datu, Sabah.
However, this male was photographed in Sepilok, Sandakan, at my relative's house. When inquired, he said this is a wild ayam , apparently wandered to his compound from somewhere nearby, and it would forage around there and to the adjacent oil palm plantation, sometimes it would roost with his stock of domestic chicken. He did try to catch it, knowing that it is different, but he failed and he concluded that this ayam was too smart and alert.
They are now feral in Borneo, and we do not know whether they are of pure wild breed, (assuming that the belief that they were introduced from Peninsular was correct, then they are G. g. spadiceus)and at the rate they are mixing with the domestic chicken, there is no doubt that even a true wild breed's linage will be at critical risk of being diluted with interbreeding. 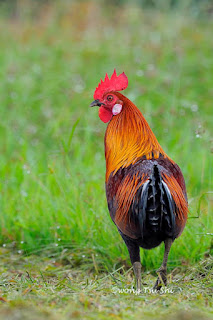