It is a rare montane forest resident of Borneo, known from seven localities from Sabah; Gunung Kinabalu; Gunung Trus Madi; Crocker Range; Kaingaran; Malangkap; Rinangisan and  Sinsuran road. One sight record  from Gunung Palung National Park of Kalimantan Barat in  December 1986 was suspected to be a migrant.

The Sabah bird is of the race Z. c. aurata which has a white bar on the  wing coverts and without bars on ear-coverts.

It has a very sweet song consisting of a series of musical phrases. In Java this bird is a star performer in popular bird singing contests and large number are harvested from wild nests owned by farmers to train as songsters (Jepson, Birding Asia, 9).

It was usually photographed in Kinabalu Park, however, I photographed this one in Rafflesia Centre. One male bird was seen foraging in a fruiting tree late afternoon, and possibly the same bird seen again on the same tree the next day and photographed. This is my new photographed lifer bird of Borneo. 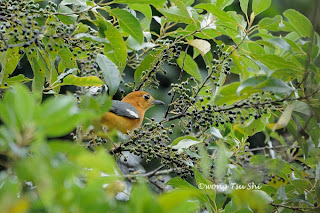