Ashy Bulbul Hemixos flavala is widely distributed in Southeast Asia and colourings and markings of the birds differ significantly across populations and regions.
In Borneo, it is chiefly a montane and sub-montane bird, but also found occasionally at sea-level. I have photographed it in montane forests of Rafflesia Centre and also in a hill near Tawau, which is one to two hundred feet above sea level.
The Bornean bird is of the endemic race connectens which has bright olive wings and tails, a puff white throat, and a yellow vent, it vaguely resembles the Ochraceous Bulbul Criniger ochraceus,  but it is smaller, quieter, and more of a canopy bird.
Susan Myers classified this under Cinereous Bulbul Hemixos cinereus connectens following Fishpool & Tobias (2005) who separated the Sunda (Borneo, Sumatra and Malay Peninsula) forms from those of Himalayas, China, and Southeast Asia under cinereus.
Both Clive Mann and Quentin Phillips rejected Fishpool & Tobias and treated this as Hemixos flavala connectens as the Borneo race is quite unlike the dull grey Cinereous Bulbul of Sumatra and Malay Peninsula and is a potential Bornean endemic with the scientific name Hemixos connectens and a proposed common name of Sociable Bulbul.
Interestingly, Craig Robson also rejected Fishpool & Tobias and continued to treat the cinereus race that occurs  southwards from Southern Thailands as Hemixos flavala cinereus with common name Ashy Bulbul in his latest Birds of Southeast Asia.
Here is the bird photographed in montane forest of Rafflesia Centre. 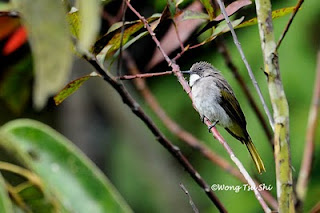 Here is the bird photographed in lowland forest near Tawau. 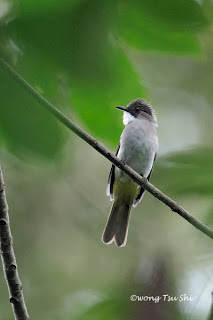 May be sometime in the near future we get to welcome the new endemic bulbul of Borneo.

Hi Wong, I have only seen and photographed Ashy Bulbul once in Panti. Now you have reminded me of this species in my HD! :)

Thanks Paul, your Ashy looks different from the the one here.