I was lucky to photograph 2 Grey-headed Lapings Vanellus cinereus, on 25th November 2013 at Penampang Paddyfield, on the west coast of Sabah.

These two birds on current visit was located by Mr. Eugene Cheah on 15th November, who alerted birders around Kota Kinabalu. Since I had earlier planned a family trip there on 23th, I brought along my camera to try my luck.

This is my lifer, my #392 photographed bird of Borneo. 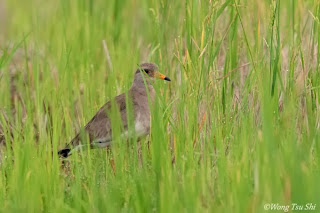 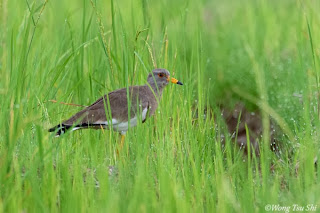 Congrats on your lifer! There was also a bird seen last year on the 16th of October at Wasan ricescheme, Brunei. Not by me unfortunately....

Thanks for update, Folkert.

They are great birds, and surprisingly hard-to-spot for such a large wader !

He brought his friend! Last year I saw 1 at Penampang Paddy near the first patch of paddy after coming our of the road shaded by trees after passing the RA site. This guy is already becoming regular I see.

Hi Zaim, I spotted them them somewhere near the place you described.