Northern Pintail Anas acuta, a rare winter visitor to Sabah, Brunei and Sarawak side of Borneo. Quentin Phillipps lists this as the second commonest migrant duck after Garganey Anas querquedula (11 of which was sighted in Tawau last year, see link here).

One female was photographed on 13th November in Tawau, foraging with a group of resident Wandering Whistling Duck Dendrocygna javanica, however, it was not to be found the next day, it might have moved on further south.

It is my lifer bird; it is getting harder and harder to score a lifer now a days. 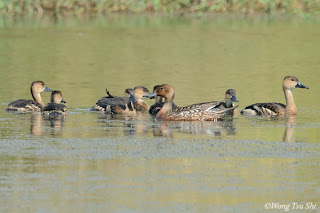 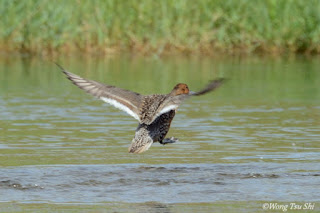 The brownish speculum indicates that this is a female instead of an eclipse male. Male in eclipse plumage resembles female but retain it distinctive metalic green speculum.
Happy birding.
Photodocument of Wild Birds of Borneo.
Standard References for my blog.
﻿

Congrats, Wong. The Pintail is very rare here in the Peninsular as well.