Mountain Serpent Eagle Spilornis kinabaluensis is one of the more difficult to see Bornean montane endemic birds. I have been to Kinabalu Park and Rafflesia Reserves quite a number of times and have not seen one until recently.

On 20th August 2012, while on a bird photography trip to Crocker Range Park and Rafflesia Reserve, I was lucky to record this lifer.

I first spotted a raptor gliding in the sky almost vertical up, it was too upright for me to turn my camera to take a shot, I had to wait for it to pass right over me before I managed to make a few clicks before it flew passed the mountain ridge. I was on the road side near Rafflesia Information Centre, Tambunan, at 1350m above sea level. The raptor was gliding straight ahead at least 200 meters above me, it was a tiny image in my Nikon D7000 camera attached with 600 mm f4 lens. 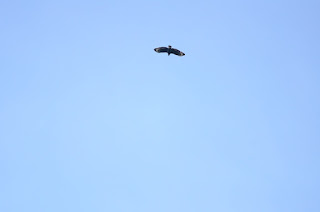 I am very sensitive to any raptor that I see at this altitude, when I first saw it with its extensive white wing band I had a feeling that this must be it.

On first glance of my images on the back LCD, I knew it would be difficult to prove as the identification features (dark throat and underparts) would not be easy to view from such a small image taken from such angle against a brighter sky.

However, I was in luck as some of the images showed the morning sun shining sideway on the head and neck of the flying raptor, the black neck is evident on the part that is exposed to the sun as shown in the enlargement below. Furthermore, I am quite confident that Crested Serpent Eagle should not occur at this altitide. 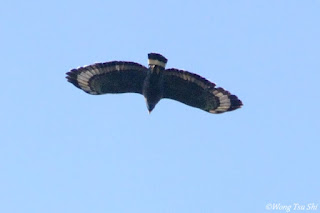 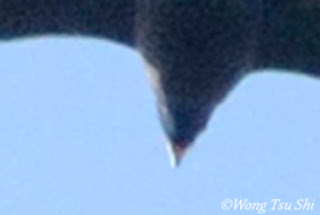 Our bird sifu CK has an excellent image of the Mountain Serpent Eagle here.