Borneo has 25 species of Bulbul, including 2 endemics. Out of the 25 species, 17 species are from the genus Pycnonotus, and 4 species from the genus Criniger.
Finsch's Bulbul Criniger finschii, is a scarce to local common sparsely distributed resident of the lowlands and secondary forests.

This genus of Bulbul differs from the Pycnonotus genus in that it shows a patch of long feather at the throat, giving a bearded appearence. 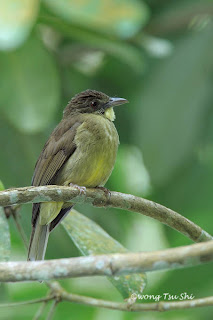 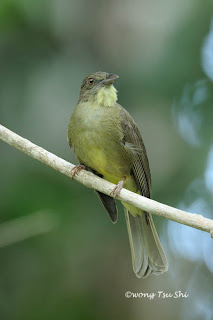 
Standard References for my blog
Notes on Taxonomy
Bulbuls are tropical forest birds distributed in Africa and Asia. Among some 15 genera, only two, Pycnonotus and Criniger, are common to both continents. All African Pycnonotus seem clearly related to the Arabian species and to some other Asiatic species.Conversely, the five African and six Asiatic bearded bulbuls of the genus Criniger  are also thought to be related.
In the broad sense, the generic name Criniger is better characterised by its conspicuous throat patch with long feathers and by their numerous and long hair-like feathers on the nape, than by the general shape of the bill – strong, high and hooked – or the plumage – very long and soft.
However, evidence from two mitochondrial genes suggests that the Asian members of Criniger form a clade distinct from the African members, and should be separated as the genus Alophoixus Oates1889 (Pasquet et al 2001). Although the distinct finschii did not form part of their study, they tentatively placed it in Alophoixus. Dickinson & Dekker (2002) did not accept this generic split as Alophoixus was erected for phaeocephalus (Yellow-bellied Bulbul), based on the distinctiveness of this form, to separate it from other Asiatic member of Criniger, and because Alophoixus may itself require splitting. Fishpool & Tobias (2005) use the genus Alophoixus, but suggest that this species may be better placed in a monotypic genus.
IOC in its update in IOC Version 2.0 (January 2009) has put all the Asian Criniger bulbul under the genus Alophoixus based on Fishpool & Tobias (2005).
Both Craig Robson's A Field Guide to the Birds of South East Asia (2008) and Susan Myers's A Field Guide to The Birds of Borneo (2009) follow the IOC list.
Clive F. Mann's The Birds of Borneo An Annotated Checklist (2008) and Quentin Phillipps's Field Guide to The Birds of Borneo (2009) use the genus Criniger.