Pheasant-tailed Jacana Hydrophasianus chirurgus is another rare bird of Borneo. I photographed this bird in winter plumage in Tawau on 8th November 2007 with Mr Kong Ket Leong. We flashed it out from the wetland and when in flight we immediately noticed its white underwing, and it looked  different from other water birds that we have seen. It than stayed hidden among the water plants. 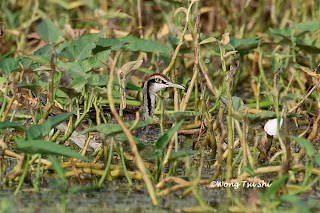 Pheasant-tailed Jacana
Its status in Borneo per available fieldguides are as follows;
- Widespread but discontinuous in Southeast Asia, from India to Philippines. There was no recent records from Kalimantan and the only recent record from anywhere in Borneo is one winter-plumaged bird seen at Kota Belud, Sabah, in Feb 1986. (Smythies and Davison 1999)

- Present status unknown, and has been seen only once since 19th century; probably no longer occurs in Borneo. (Mann 2008)
- Probably resident in the Barito drainage of Southeast Borneo, but there are no breeding records. (Mackinnon and Phillipps 1993)

Robson put a question mark on this species when describing  its range and status in Borneo (Robson 2008).
REFERENCES
MacKinnon, J. and Phillipps, K. (1993) A field Guide to the birds of Borneo, Sumatra, Java and Bali. Oxford: Oxford University Press.